Brought to you by HaoPlay limited, Tribal legends is a tile matching game set in the primitive era with a compelling tale about the world's mysteries.

The plot revolves around a giant meteor crash that brought about changes of huge magnitude in the character's world. The mysteries started with the disappearance of various members of the tribes. The world also underwent innumerable mutations. Creatures of the past also began to resurface like dinosaurs belonging to the Jurassic, Triassic and Cretaceous periods. Now it is up to you and your friends to find out the reason for all these oddities as well as finding your lost tribe people.

The main gameplay follows the usual match-3 formula. with standard combos and solutions usually seen in the genre. You need to line up tiles of similar shape and colour using a switch and slide system to clear the level. A story dungeon is also available and it houses 1000 different levels. 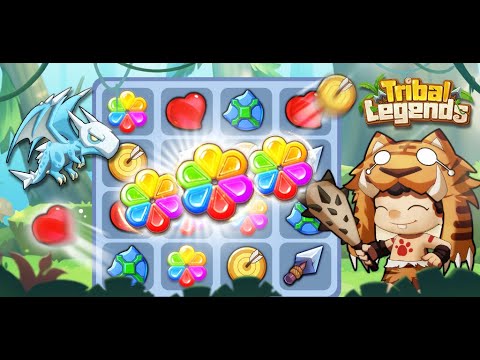 The puzzles are also directly connected to the battle scenes. You have to strengthen your team by levelling up, collecting loot, upgrading equipment and learning new skills, before defeating your opponents to proceed. The adorable character designs make the fight animations fun to watch as the illustrated world comes to life.

Another fun addition to the game is pets. It gives you the option of keeping different ancient animals as pets. These pets can then battle each other for dominion.

Tribal legends soft-launched in the Philippines

HaoPlay Limited has just released Tribal legends' early access in the Philippines on Android and can be downloaded from Google Play.

The developers are yet to confirm the global release date. It looks like iOS and Android players from other countries will have to wait quite some time to get their hands on Tribal Legends. Also, check out our list of the Top 28 best multiplayer games for Android phones and tablets.
Next Up :
Lead your tiny legendary hero army to victory in Age Of Legends: Idle Wars, out now in Canada on Android