Publisher Level Infinite and developer Hotta Studio has finally launched its shared open-world MMORPG Tower of Fantasy, which can be downloaded for free right now on PC and mobile through the official site, iOS App Store and Google Play Store. 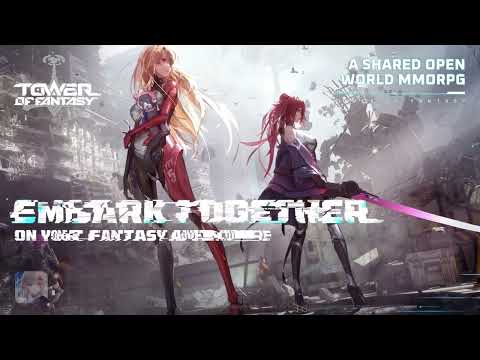 The news gets even more exciting for early bird sign-ups as Tower of Fantasy announced that 4 million global pre-registrations have been reached, meaning that more rewards have been added for pre-registered players to enjoy. When wanderers enter the game for the first time, they can look forward to receiving up to 59 free draws, 1 SSR selector, 1 SSR relic and 10 limited cosmetics (more details about these rewards can be found via the official event page).

What is Tower Fantasy?

While the destruction of earth is indeed a tragedy, humanity has somehow found a way to survive by fleeing off-planet into the distant world of Aida. In Tower of Fantasy, players embark on a post-apocalyptic sci-fi adventure throughout the RPG's vast open-world environment, battling monsters in fast-paced combat and encountering intriguing characters along the way. Sounds intriguing? Here are six reasons why you should give it a try…

Players can not only immerse themselves in this anime-inspired adventure through open-world exploration, but they can also discover a shared gameplay experience on Aida with their friends. Players can look forward to uncovering the secrets of hidden ruins, battling epic world bosses and putting their skills to the test, as well as learning more about the backstories of the many unique characters they'll meet throughout their quests.

The planet of Aida offers everything from small mini-games to random loot. As players venture farther across the planet, they'll chance upon secret passwords, a highway for racing, a random soccer field, or maybe even a mysterious little bouncing mushroom.

Teamwork makes the dream work in Tower of Fantasy, as players can join forces with their best buds online to engage in some adrenaline-pumping co-op experiences. They can battle beasts with friends and explore the world together as a team, all in the midst of an exhilarating battle system.

Combat is a fast-paced affair where players can switch weapons on the fly to spice things up during epic fights. Fearsome bosses are littered throughout the game just waiting to be challenged, so players will have to find the best combination of skills and weapons that will suit their playstyles best - whether they're wielding powerful staffs or bringing in the big guns quite literally.

Of course, exploring the world around you is definitely more exciting with mounts, and Tower of Fantasy boasts a wide variety of mounts and relics that can spruce up your wandering. Movement and transportation are made more exciting with mecha-like relics as well to provide special perks in combat.

Players can expect to mount everything from bi-pedal mechs to cybernetic horses, making the cross-platform title more unique when it comes to exploring every nook and cranny of the planet Aida.

Stunning visuals aside, the game also features a freeform character creation system that lets players express themselves with their anime counterparts in the game. Players can tinker around with their outfits, eye shape, skin colour and so much more to make sure their physical appearance suits their personal style.

If you're keen on getting your hands on the game, Tower of Fantasy is now available to download on the iOS App Store and on the Google Play Store for Android devices. It's a free-to-play game with in-app purchases, with multi-language support in English, Japanese, German, French, Spanish, Portuguese, Thai and Indonesian.

You can join the community of followers on Twitter or visit the official website to learn more about the game as well.

What's A Preferred Partner Feature?
From time to time Steel Media offers companies and organisations the opportunity to partner with us on specially commissioned articles on subjects we think are of interest to our readers. For more information about how we work with commercial partners, please read our Sponsorship Editorial Independence Policy.
If you're interested in becoming a Preferred Partner please click here.
Next Up :
Harry Potter Magic Awakened release date and the rest you need to know