If you're a smartphone- or tablet-owning gamebook lover, you'll probably already be aware that the App Store and Google Play are chock-full of digital recreations of classic Fighting Fantasy novels and other Choose Your Own Adventure books.

There are several companies working on these digital recreations for mobile platforms, including Tin Man Games and Cubus Games - the latter of which has just released a new gamebook entitled The Sinister Fairground.

The Sinister Fairground is a digital adaptation of a paper gamebook that was penned by ten authors from Nocte (the Spanish Horror Writers Association).

Cubus Games was inspired to create this digital adaptation by the classic role-playing games that its members played growing up, including Dungeons & Dragons, The Call of Cthulhu, and The Lord of the Rings.

Graphic adventures like the excellent Monkey Island series and Simon the Sorcerer, as well as pioneers in interactive gamebook apps like the abovementioned Tin Man Games or inkle's Sorcery!, also served as inspirations. 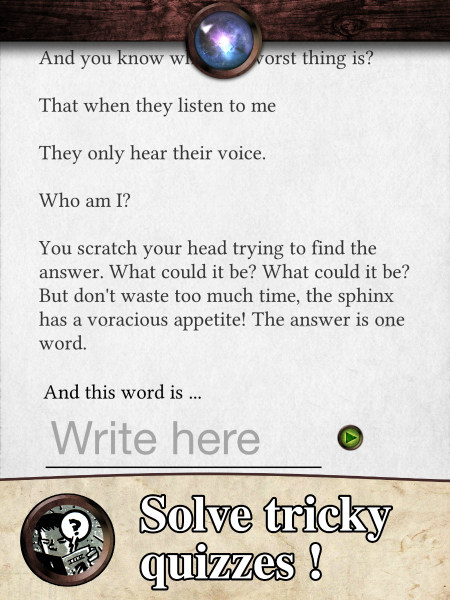 The Sinister Fairground centres on a travelling carnival that has set up shop just outside of your village.

You (the game's protagonist) arrange to meet your girlfriend Sophia in the fairground. You agree to meet up close to the fortune teller's stand just after the sun goes down, but she fails to show her face.

After waiting a while, you begin to explore the fairground in search of her and quickly discover that something is wrong and the fairground isn't as harmless as it first appears.

Your aim throughout The Sinister Fairground, then, is to save your missing love. How, though? Well, by visiting each of the rides and attractions in the travelling carnival and interacting with the strange creatures that reside within them.

Along the way, you'll have to overcome challenges. You'll also have to solve puzzles and enigmas; find, collect, and manage up to 100 unique objects; and defeat otherworldly enemies in classic dice-based battles using a range of weapons and a little bit of strategy. 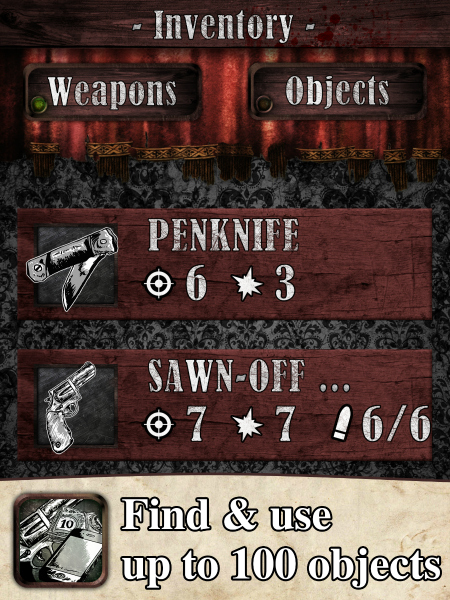 Cubus Games hasn't simply ported The Sinister Fairground to mobile devices and called it a day. The studio has enhanced and improved the experience of reading the gamebook, and implemented many features that make it stand out from the crowd.

The Sinister Fairground features a fully interactive map, for example. This allows you to choose your next port of call with precision. You also have a full-fledged inventory that houses all of the objects and weapons that you find throughout the story.

Speaking of weapons and objects, every single item in The Sinister Fairground has its own illustration. Each of the gamebook's 60+ characters has illustrations, too. Furthermore, there's an original 45-minute soundtrack that's been composed and recorded especially to tie in with each fairground attraction that you visit.

According to Cubus Games, the combat system in The Sinister Fairground is also unique, as your success in battle isn't based solely on the rolls of dice. You can choose to use weapons in every round of a battle, for instance, and utilise booster items to improve your chances of winning.

You can purchase (using in-game currency earned throughout play) booster items and other strange items like attack spells in a special area of the fairground called Arcane Corner, and also level-up your protagonist to improve his abilities. 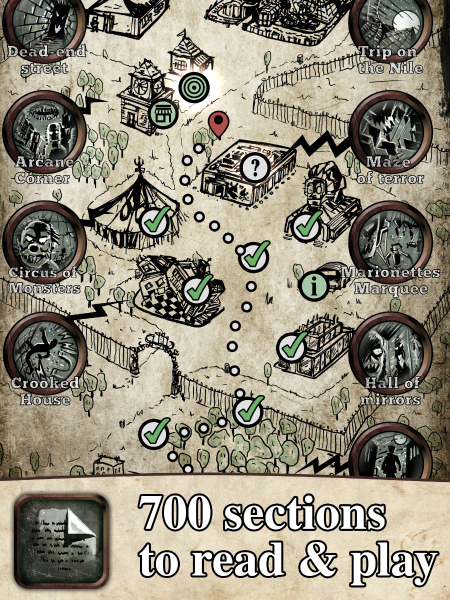 Cubus Games is proud of the product it has created, especially its original music, innovative combat system, and fun Easter Eggs that are strewn throughout the story.

The Barcelona-based studio now wants to bolster the gamebook community. It also wants to encourage more people to read interactive fiction with new gamebooks based around science fiction, zombies, and fantasy.

The Sinister Fairground is currently available to download from the App Store for £1.49 / $1.99 [buy]. It will be available on Google Play for Android devices in the future.