You won't chop this one in half with your spade

This is what the iPhone needs more of - cool retro arcade games where you control a huge worm and get to boost up through the earth and eat things like cows, joggers, mothers with strollers, police cars...

Yeap, Super Mega Worm from indie outfit Deceased Pixel is out on the App Store and it seems to be packing in the fun.

The game's basics are you have to keep eating stuff to stop your super mega worm exploding so you roam around under the ground and then rise up from beneath to chomp. You have to be a bit clever however as when they see your monstrous form bursting forth, most edible things will run away screaming.

In this way, you have to target the tastiest things - coming up directly beneath them - while also trying to get a second bite of whatever's still around as you fall back down. Using the boost will get you higher into the air - you can even eat birds.

Ways to direct a worm

It's also worth pointing out the controls; there's a slider which you scrub left and right to vary the direction and tightness of your undulating movement. Sounds odd, but it's a really neat - and nice - method.

My only concern about the game is how repetitive it could get, but as I've got a long way to go before I get to eating satellites or using the laser blaster mouth power up, it will probably keep me going for the time being.

Indeed, Deceased Pixel has pointed out that, in future, it will be updating with new levels, new items to eat, new game modes and new special powers as well as support for Game Center and iPad. 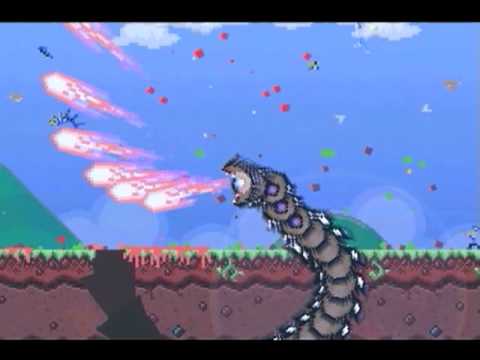 Subscribe to Pocket Gamer on
Next Up :
The Day We Fought Space lets you wreck space debris and fight aliens, out now on iOS

Super Mega Worm gets free version for iPhone and iPad