Get started on honing your PvP prowess

A good Summoners War: Lost Centuria beginners guide should start with how to reroll for your first few characters, which we’ve already tackled in our separate Tier List. To sum it up though, you will have to log in as a guest first and then log in with your Google account if you don’t like the way your first summons turned out. Apart from that, it’s really just making the most of the cards you’re dealt, which is what we’ll talk about in this collection of tips and tricks for the wide-eyed beginner.

Getting a hang of the game

If you’re new to the Summoners War world, the characters will all be fresh faces to you. However, for longtime fans of the franchise, they’ll be happy to see their favourite heroes reimagined with awesome new character designs and cool move animations. As any Summoners War: Lost Centuria beginners guide will tell you, going through the tutorial is crucial for both newbies and veterans alike, as completing the tutorial will reward you with tons of in-game goodies to help you hit the ground running.

In fact, since the game has only just been released, getting into it is more rewarding than ever. All players will easily receive crystals, scrolls, and cards simply as a welcome bonus, with a daily login event that hands out lots of useful materials to celebrate the global launch. That said, you’ll likely breeze through your very first 10-summon pull, and hopefully, you’ll nail at least one Legendary card without having to reroll.

1
Joining an Alliance - Everyone needs a helping hand

Given that the game features real-time 8v8 battles, you’ll want to make sure you buff up your cards as much as you can to rank up and rise to the top of the charts. As a beginner, it’s important to play a few matches until you unlock the Alliance feature. Join an Alliance as early as you can. In the Alliance Trading Post, you can request cards you need from your mates, as well as offer your own extra cards to them for support. 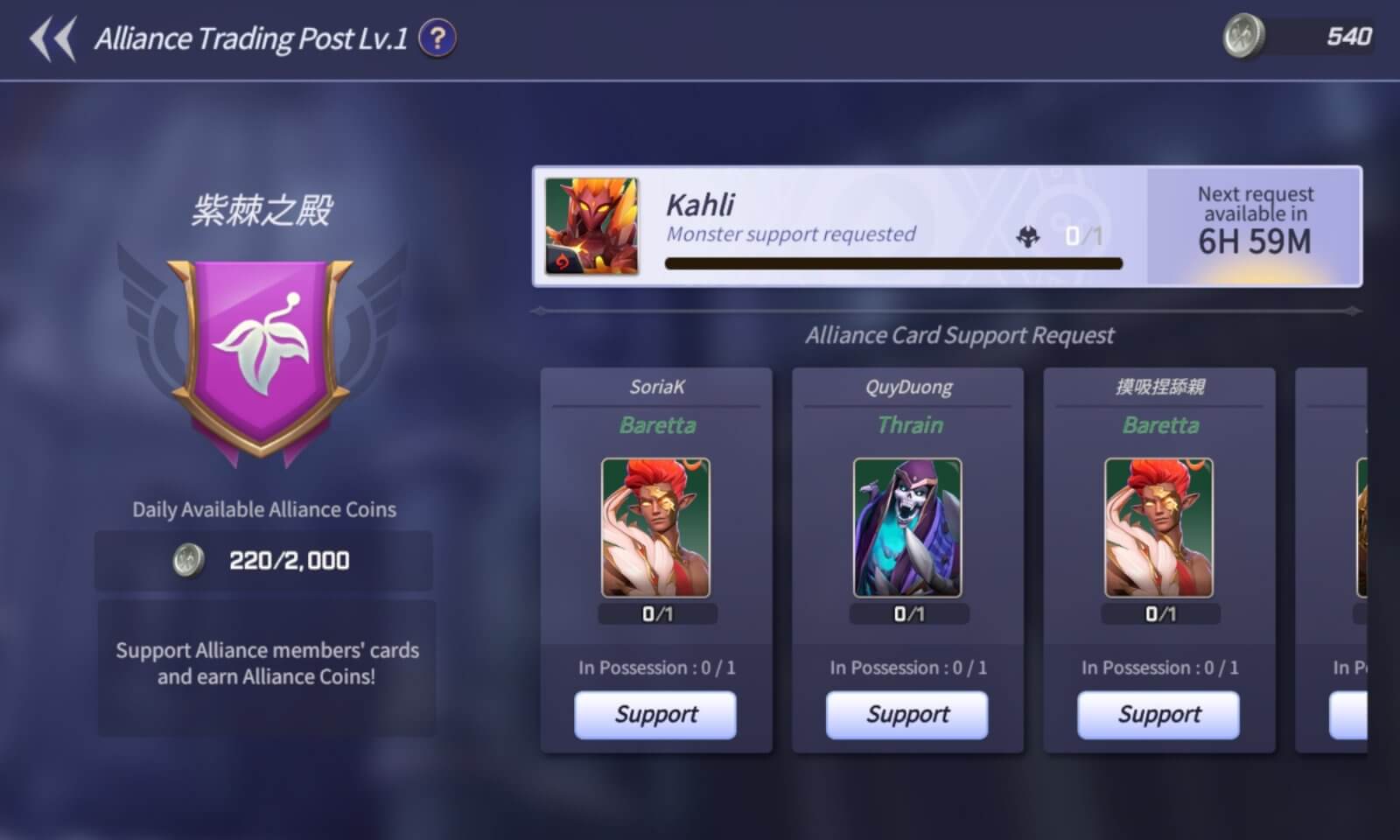 Supporting a teammate lets you earn Alliance Coins, which you can use in the Alliance Shop to buy materials and other what-have-yous. I suggest saving up to buy a Normal Skill Stone Summon Ticket first, then prioritize the rest this way: Enchantment Scroll, Mystical Dust, and Hero Card. The Skill Stone grants your characters extra abilities to help turn the tide in your favour during matches, while the Enchantment Scroll and the Mystical Dust are all about Runes, which we’ll talk about in the next section.

You can craft Runes in the Craft Building on the Territory tab of your menu using Mystical Dust. As you’re starting out, you can craft Normal-Rare runes, which can be Energy, Fatal, Swift, Guard, Blade, and Will. Different kinds of runes will have different effects - you can check out the Set Effect description in the Craft Building to find out exactly what each one does. The important thing to remember is that as much as possible, try to aim for that Set Effect when you’re engraving Runes on your characters. 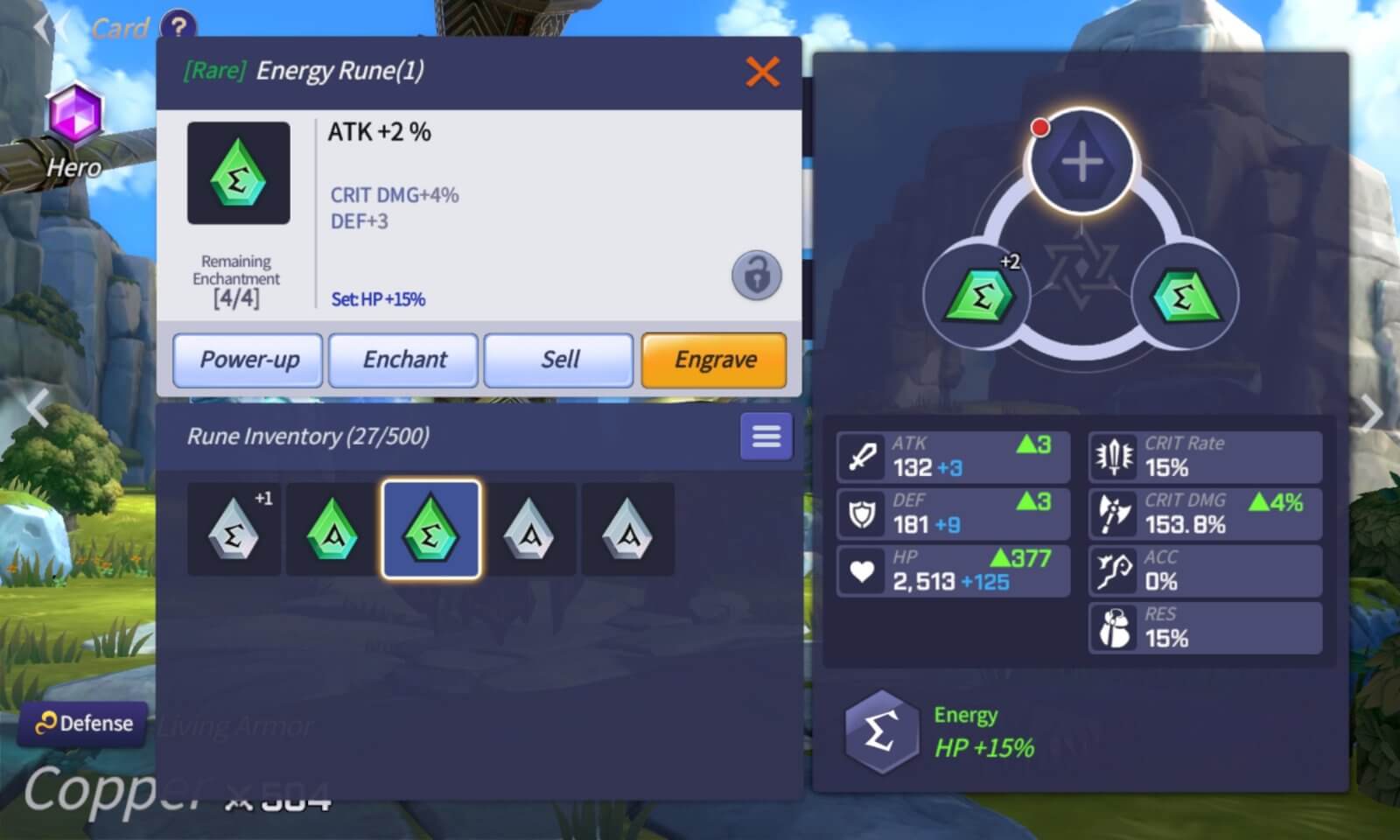 For instance, you’ll want to boost an Attacker’s damage by equipping him or her with three Fatal Runes, granting an overall Set Effect of ATK+15%. Each character will have their own speciality, so be sure to maximize their stats and match the Runes according to what they do best. Don’t engrave a Fatal Rune on, say, your main tanker, which you’ll probably want to equip with a Guard Rune (DEF) or an Energy Rune (HP).

If you can, try to wait it out until you reach Level 5 to unlock the “Craft Mid Rune” level in the Craft Building. You’ll be able to craft better runes here, so you won’t waste your Mystical Dust on low-level Runes that you’ll probably end up throwing away or selling further down the line. Patience is a virtue, right?

When it comes to beefing up your Runes, you can Power Up by consuming lesser Runes, or enchanting them using Enchantment Scrolls. Take note of the “Remaining Enchantment” - go for the ones with 5/5 rather than just 4/4. 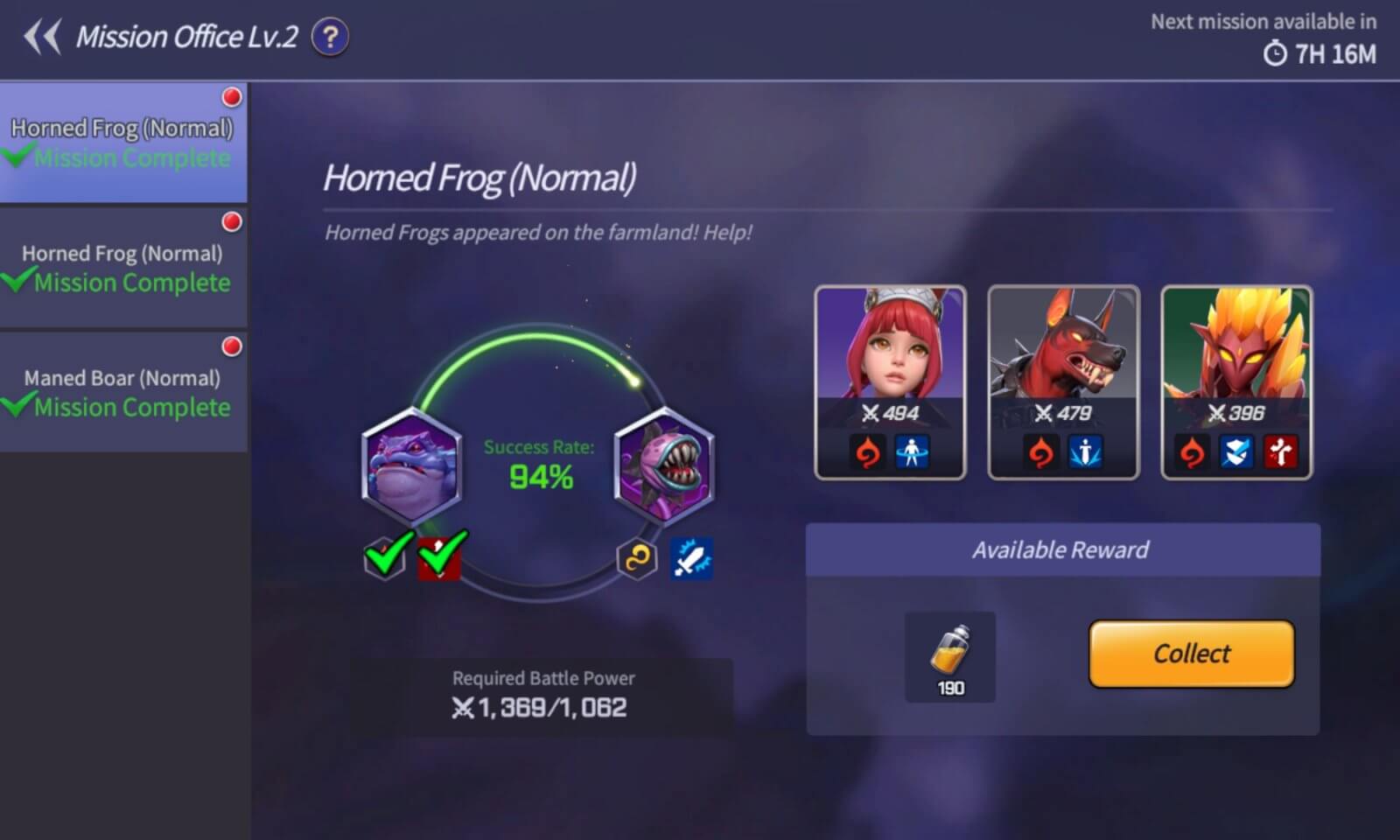 And finally, where do you even get Mystical Dusts to craft your Runes in the first place? You’ll want to take advantage of the Mission Office under your Territory tab, where you can send your heroes off to missions for a few hours and get rewarded with Mystical Dusts when they return. Take note of the Success Rate here - you can tap on the Enemy’s Weakness to pick the best characters that have a higher success rate for that particular mission. Successful missions give you more Mystical Dusts - and you’ll definitely want as much of those as you can get your hands on.

When you duke it out with other players in the ranked matches, winning grants you Glory Medals while losing penalizes you with a deduction on how many medals you currently have. Obviously, you’ll want to win as many matches as you can, so to make sure your party is up to the task, be wary of how you position them in your Formation.

The frontmost character should always be a solid tank with a huge HP pool to make sure he or she doesn’t go down easily. Support characters will likely be in the Backline, but as for your Attackers, don’t bundle them all in one place. Be sure to scatter them throughout the Frontline and the Backline for better survivability - you definitely wouldn’t want a Backline skill like Nicki’s Teddy Spell to wipe out all of your best characters in the Backline in one go.

Also, be sure to check Hero Passives in the Monster icon in the Lobby, as some characters will have nifty little passive skills that may just spell the difference between victory and defeat. Study the Effect Details for your characters’ skills - you can tap on the highlighted words on the skill descriptions to find out what each effect does. Some effects, however, aren’t highlighted and are only triggered with a fixed chance. For example, Ganymede can Incinerate cards with a fixed chance - cases like this require you to boost your character’s ACC, as accuracy can increase that chance to trigger your skill effect in battle. 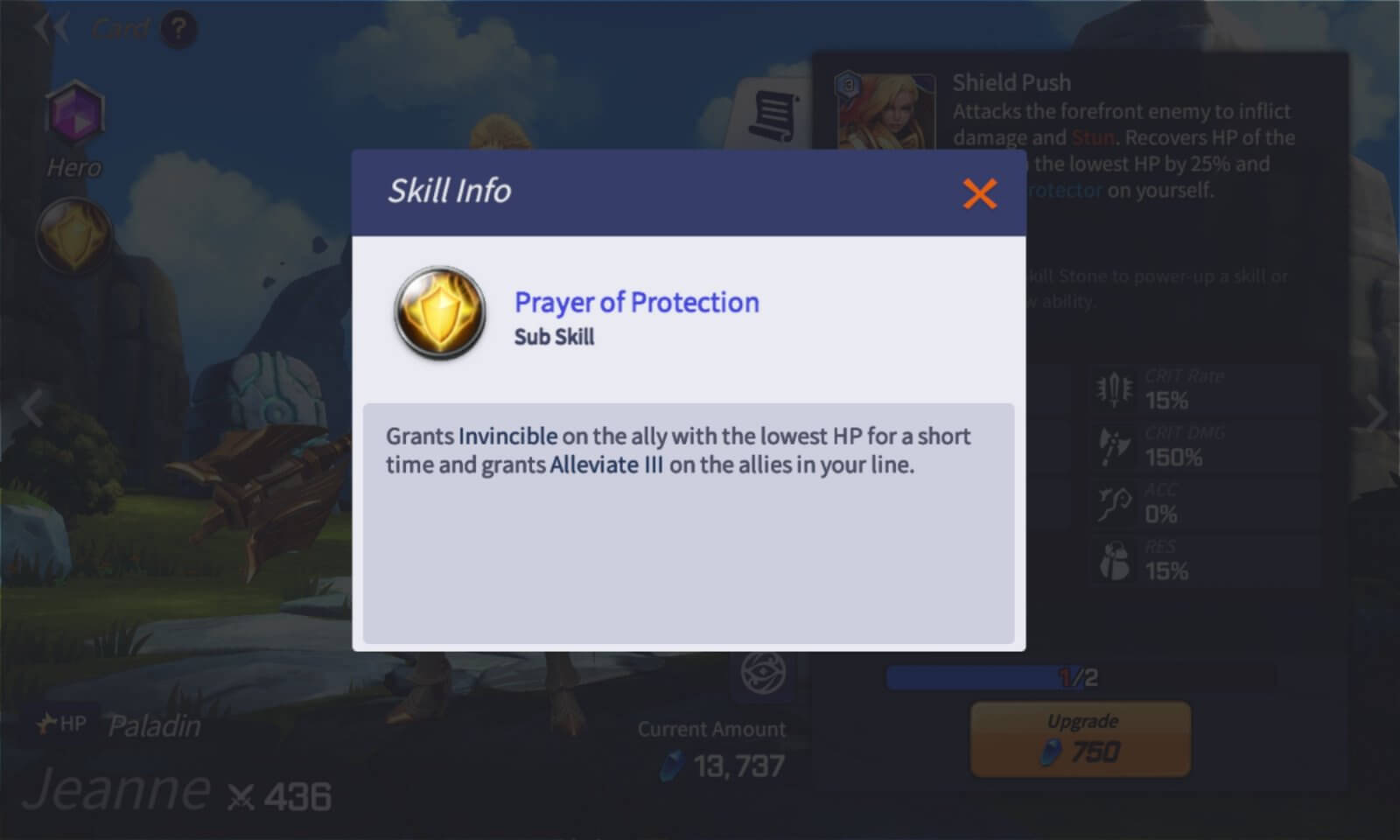 When up against any opponent, try to Counter whenever you can. Countering simply means using a skill from your deck right after the opponent uses one - but don’t get too caught up in waiting for the perfect moment to Counter that you end up letting your Mana bar fill up to max. Use your skills once you have 10 bars - it’s never a good idea to let time elapse without using your skills.

Last but not least, tap the TV icon in your main menu to Cheer battles for extra goodies. You can Cheer an existing battle between other players, and if your bet wins, you’re rewarded with useful materials as well - not bad for pretty much zero effort. Also, you can add friends to engage in Goodwill Battles, where you can test out your team formation in matches without the burden of losing Glory Medals when you’re defeated. It’s a great way to have some fun with buddies and help each other out - it pays to have friends, after all. Once you’re buffed enough to reach Silver V rank, you can then participate in Normal Battles without running the risk of losing Medals as well. 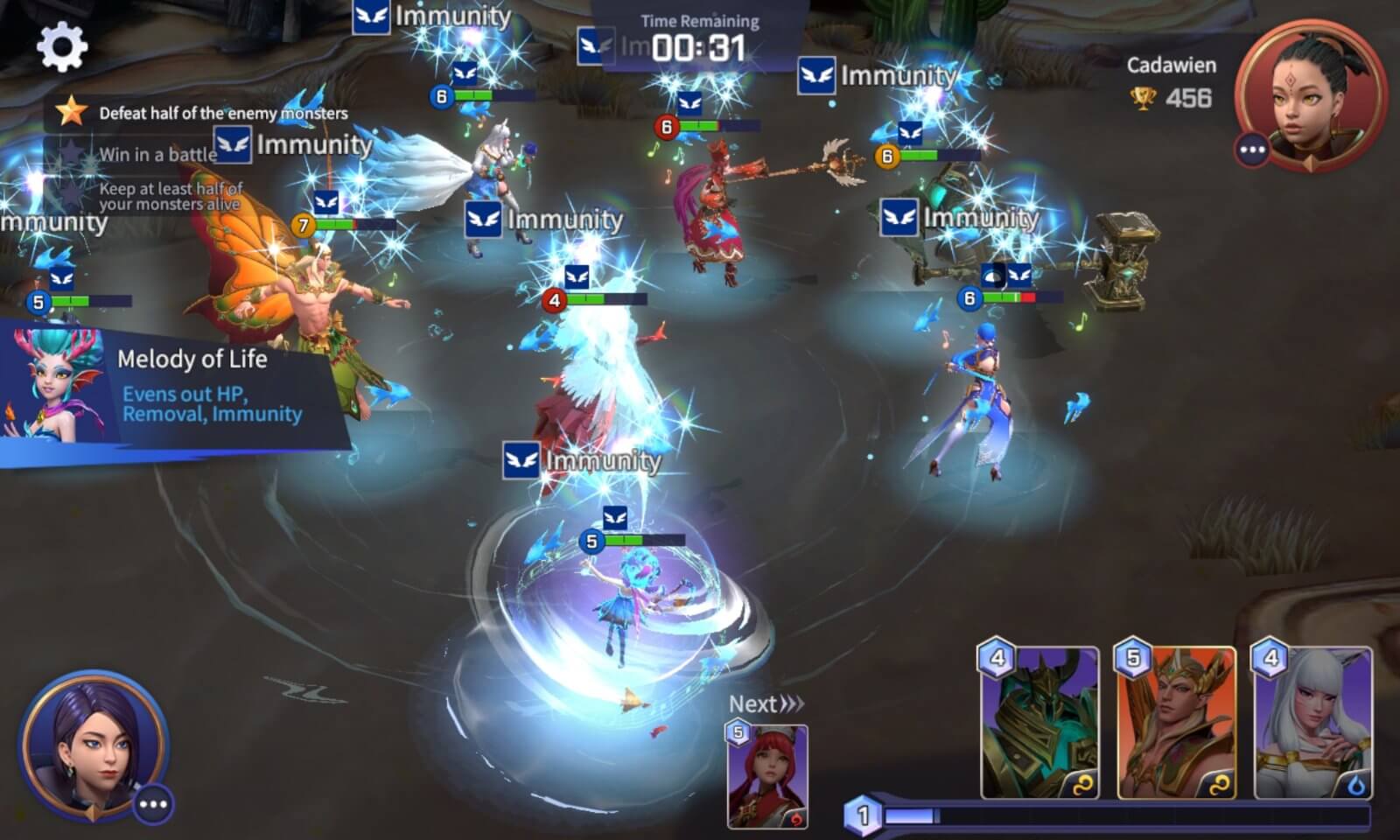 And that’s it for our Summoners War: Lost Centuria Beginners Guide! Remember, there is no auto-fight function here, so you really have to go all-in whether you’re fighting for supremacy in ranked matches or just having fun in the single campaign mode. It may take a few tries before you can get the hang of everything, but it’s relatively simple given that there are no overly complicated banners and clutter unlike in other gacha games out there - simply keep at it and you’ll be dominating the battlefield in no time!