That character art though

I'm sure you're well aware of the fact Subway Surfers will be coming to a TV box near you, but today we got a little look behind the scenes at the main characters.

With 1.6 billion downloads, Subway Surfers is a widely popular mobile game with an enormous following. The show tags along with protagonist Jake and his crew on all of their adventures. We don't know exactly what they'll be getting up to and whether it'll tie into the mobile franchise at all, but we'll keep an eagle eye out for more news.

As for that sneak peek, SYBO released descriptions and character art for the show's four main characters:

"Jake is a dreamer whose true love is art. He's also an idealist who sees the world with rose-tinted glasses and has big plans to make the world a better place… although he's not quite sure how just yet. At heart, though, Jake is a simple, black and white kinda guy who, above all, absolutely despises injustice."

"Tricky is, in many ways, Jake's polar opposite. Focused, organized and a bit of an over-thinker. Her analytical mind makes her the defacto brain of the Surfers." 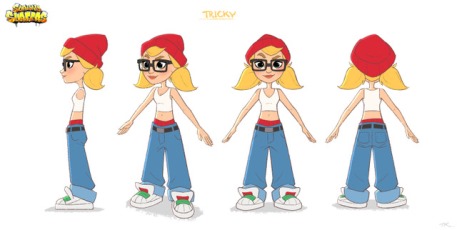 "Fresh is the glue that holds the Surfers together. His personality is somewhere between Jake's impulsive nature and Tricky's sensible disposition. He's highly intelligent and perceptive, but speaks most passionately through his boombox which he is exceptionally attached to."

"Yutani is the tech genius and the gang's "Q". She has a crush on Jake, but science is her true love. She is wildly imaginative with an insatiable curiosity. With zero fear of failure, she loves creating 'never before seen' contraptions."

Subway Surfers characters - Every possible way to unlock them