Spellforce is a well-regarded name in fantasy strategy on PC, having spawned three games on that platform. It has a passing similarity with the venerable Heroes of Might and Magic series, but weaves its own narrative. Still, that's likely why this, the franchise's first outing on mobile, got subtitled Heroes and Magic.

When you first start the game, it prompts you to choose whether you want to "adventure" or "battle". There's no explanation as to what either means, which is very much a harbinger of what's to come. Still, they're fairly self explanatory, so I started with battle.

This proved a wise choice.

Battle mode is a series of escalating fights against one-off foes. You'll arrange your forces on a small battle map, and try to take out the enemy units before they take out yours. Win, and you'll get experience and items to upgrade your troops. Fail, and you'll have to try again.

A few vague tooltips don't substitute for an actual tutorial, but after a few turns you can puzzle out most of what's going on. Shame, then, that this bills itself as a strategy game rather than a puzzle one.

On a turn you'll issue orders to each unit. Missile and spell troops can used ranged attacks. All units can move to engage in combat and, once engaged, can choose one of four offensive and defensive moves to use. The turn proceeds through fixed phases, with missile fire before movement and attacking. 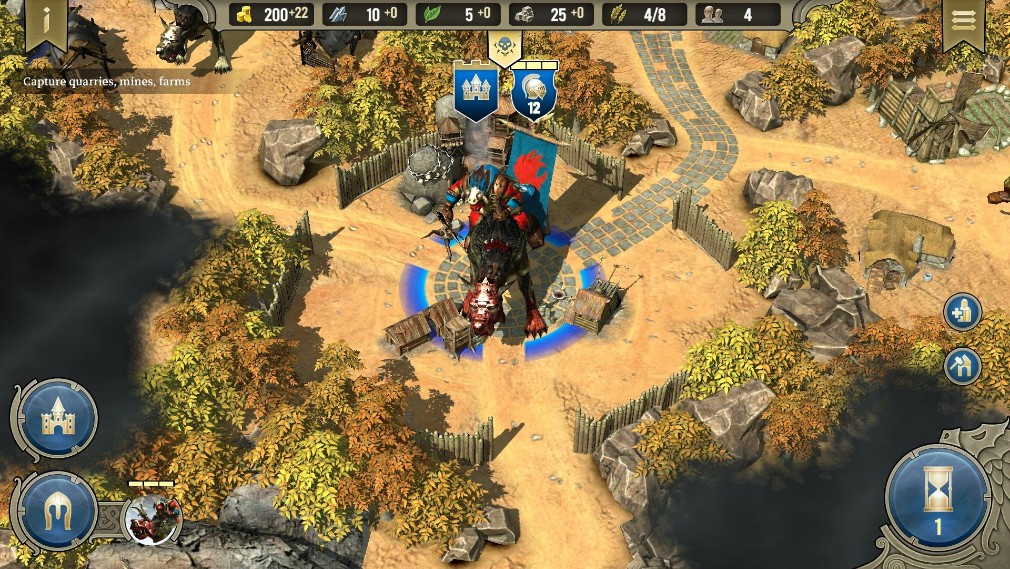 Between the troop types, orders and phases, there's some basic strategy to master. You can, for example, plan to finish off an enemy with missile fire, freeing up a melee unit they're engaged with to move and fight another enemy. But it's pretty basic stuff. The maps are small and don't offer much room for maneouver or use of terrain.

There's probably a bunch of other factors to consider. Units have a roster of stats and some of the spells and items and special attacks likely work better in some situations than others. Unfortunately, none of this is ever explained, and useless icons hamper any attempt to figure it out. So you're left thumbing the screen like an idiot, trying to make the best of things. 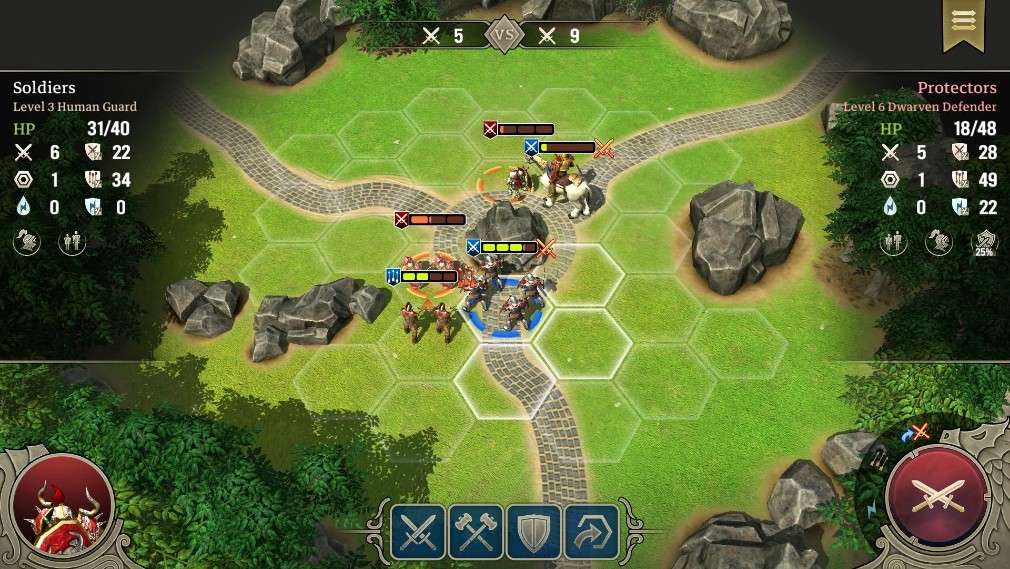 Even this doesn't always work, as the interface is clumsy and bug-ridden. There are other oddities: sometimes the game won't let you move your units next tot to one another. But without any instructions or tutorial and with such a poor interface, you're left clueless as to whether it's a feature or another bug.

However, there is at least some fun to be had here in basic strategy, and the draw of revealing new enemy types and building up your troops. You can't say the same of the "adventure" mode.

Trying it out starts you off with an army on a wider world map. There are enemy icons guarding important things like mines and farms that you might want to claim for your own. Above their heads are numbers, which indicate how hard they are to beat. The game doesn't bother to explain this, likely leading to several pointless, unwinnable fights before you work it out.

When you do win your first fight, the game tells you that you now own a mine which you can add workers to. It doesn't tell you how. It doesn't say that you don't do it by anything obvious like tapping on the building. It doesn't explain that instead you have to guess which of the various useless icons littering the screen opens the right menu. Or what to do when you get there.

Unlike the battle mode, where the guesswork is kind of an interesting puzzle in its own right, the adventure is just painful. Each time you guess wrong, your game will likely end, forcing you to slog through the scenario from the beginning again. Ditto if you encounter one of the many bugs. It won't take long before you conclude that it's not remotely worth the effort.

It's clear from the various icons and menus that there's plenty going on in Heroes and Magic. Maybe even enough to make a compelling game of strategic battles and economic management. As it stands, there's no way to tell how deep that rabbit hole may or may not go.

The game is not finished, lacking any kind of rules or tutorial and littered with awful bugs. It's an adventure, all right, but not the fun kind you were probably hoping for.

An unfinished, and not particularly entertaining game of trial and a lot of error
Next Up :
UFO99 review - "A fun little arcade game on the go"