Game designer Barry Mitchell has released Space Defender 3D, a side-scroller inspired by the classic Defender games from back in the ‘80s, and it’s out now on iOS.

Much like the game that inspired it, Space Defender 3D is a side-scrolling space shooter where you pilot one of four spacecrafts through the deep bays of space and have to blast your way through waves of enemy alien fighters.

To truly test your skills, there are bosses that appear at the end of each wave and provide a big challenge, and you get to choose from five difficulty levels in case the experience feels a little easy or too punishing. 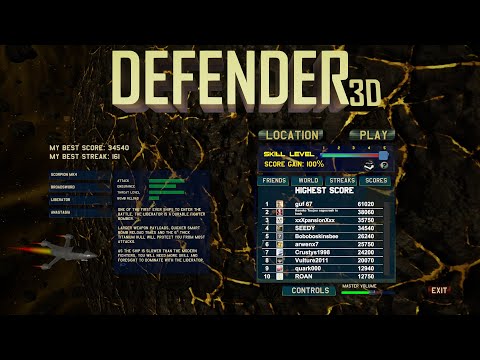 Although it takes after the classic 1981 arcade title from Williams Electronics, some new features have been added to Space Defender 3D to bring it in line with modern expectations. As the title implies, the game now has 3D graphics. It also offers a new selection of ships to pilot, new weapons and new enemies, and you can even rescue other pilots who are lost in space and will give you rewards for helping them.

“Today I release the long awaited Defender 3D on iOS. If you loved Defender back in the 80s, or you love side scrolling space shooters, Defender 3D will scratch that itch,” says Mitchell. “If you too remember standing in the arcades of old, watching some cool guy playing that amazing space shooter, killing aliens and saving the galaxy, you can now join him in the hall of Space Shooter FAME through the medium of the modern mobile phone.”

You can download Space Defender 3D from the iOS App Store. It’s a free to play title containing in-app purchases.

If you're a fan of shooters, read our list on the best ones to play on iPhone or iPad devices.
Next Up :
CROSSFIRE: Warzone adds new Sudden Breach content and other quality-of-life improvements in latest update