Is anybody out there?

Please do your best to avoid mixing up RymdResa with the Silver Award-winning minimalist strategy game Rymdkapsel. I know it's hard. Please try, though.

RymdResa is a text-based game. There - I said it. Don't run off. That's how it's described by the developer, anyway. As you can see in the gameplay video below, however, there are plenty of visual elements in RymdResa, too.

You play a spaceship pilot trying to find a habitable planet for the Survivors. Armed with only a few co-ordinates, you have to find planets, asteroids, and wrecked ships.

Excavation will sometimes gain you Space Points, with which you can buy bigger and better ships. You will also acquire oxygen tanks, food, and other resources required to survive in space.

It's a lonesome experience, sure, but you won't be entirely on your own here. 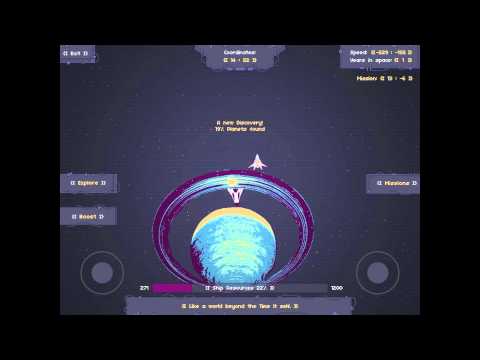 That's because you can communicate with other players in real time in RymdResa via a radio system.

You have to be located in the same area of space as them - and there is some random generation - but they may be able to offer you some handy co-ordinates, at least.

RymdResa is heading to iPad and Wii U, and is currently in beta testing. Expect to get engrossed in its poetic interactive story, voiced by Eric Reed, in the near future.