After crashing my plane into the aircraft carrier for the fourteenth time I decided to go back and play through Rogue Ace's tutorial again.

In any other mode - frontline campaign or arcade - the taking off and landing is down to nudging the right stick with subtle touches. Holding up will accelerate the plane simply enough. Once in the air, movement is focused on the left stick and speed control stays with the right stick.

When it comes to landing, the speed must be lowered gently, the angle of the plane needs to be correct and only then will the plane glide to a stop before overshooting the runway, allowing repairs and ammo refills.

The controls are intuitive after a short time and easily become second nature and any difficulty begins to fall into the background, bringing the combat to a focal point.

Sweeping through the air and spraying bullets into enemy craft is the easy part. Watching them explode into pieces is a joy and arcing through a loop to pick up the power ups they drop feels fluid.

Starting with a normal campaign, a blustering army officer spouts mission briefings to rival Stephen Fry in Blackadder Goes Forth and points out objectives. These usually entail aerial dogfights or bombing runs to destroy bases, tanks or boats. 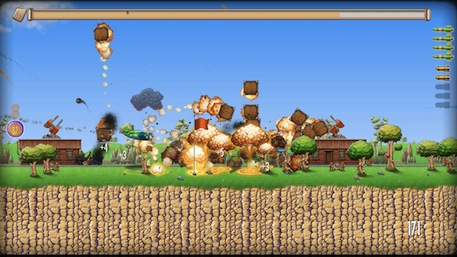 The face buttons control dropping payloads of bombs and shooting missiles directly forward, because the R button is focused on the turret and the L button gives a boost of speed when held. You want to try and avoid hitting the A button for the most part though, since it functions as the ejector seat.

Ejecting before a crash does save the game however, so it has uses. Though I found out the hard way, ejecting several times into the sea or straight into enemy hands, while my thumb stumbled for rockets.

Away from the normal campaign is the frontline version. This gives the player a map of enemy bases to choose from and, like a board game, you have to proceed across the map from one side to another, where the final base is found.

Along the way, enemy craft in the form of mini bosses will hover in spaces adding to the objectives for that area. Usually it's as simple as taking out a certain number of planes, tanks or buildings in order to pass the mission.

Frontline is tough. Even removing the aspect of mini bosses, the missions require so much movement and danger that it's very easy to end up in pieces.

One crash and all progress for that island is lost, meaning a retry. It's not much of a punishment, but it's certainly a frustration at times. This campaign is timed, also, giving a specific number of in-game days in which to capture the final base.

Playing the various modes unlocks others. Survival mode speaks for itself, really, but is probably the most enjoyable of the styles of gameplay. Having just one plane to cause as much carnage as possible keeps things exciting. 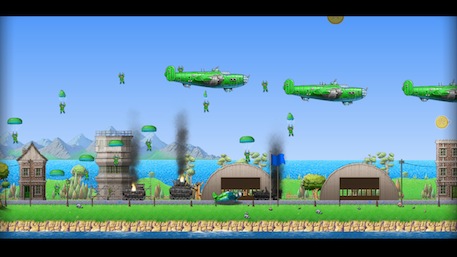 The biggest issue with Rogue Aces is the repetition. There's very little variety in the missions meaning the action soon becomes stale and the humour and charming graphics aren't enough to give the game the legs it needs.

There's only so many times ejecting the pilot and watching them spam grenades through the air in the hope of extra experience points, is funny, or interesting.

Which brings me to levelling up your chosen pilot. Gaining experience opens the ability to pick power ups before a mission starts, which is fine, but it doesn't supply the drive needed.

Perhaps including different pilots with varying skills might have made opened up interesting paths, lending the title some variation in play style or mechanics.

While the actual combat is appealing, after time the inherent samey-ness ends up asking too much of the player. It wasn't long before I was pining for another game to play.

There are some nice moments in Rogue Aces, but in the end it's too repetitive for its own good
Next Up :
Hundred Days review - "A success for the management genre"