Popular mobile car-based sports game Rocket League Sideswipe, an adaptation of the popular console game of almost the same name, has announced its next big batch of content with the launch of Season 4. Sideswipe has been rocking this seasonal model of content drops for some time, usually running for about two months, and each of them has brought a new Rocket Pass as well as some other new tidbits of content.

Season 4 of Sideswipe is sporting a medieval theme, with lots of axes and fire and brimstone to show off. The big reward item this time around is the Eggscalibur Arena. Modeled after a sort of old-school gothic church, stained-glass windows and all, this lovely new area to compete within will have you really feeling like you’re in the dark-ages. With the addition of rocket-powered speedy cars flying through the air as they try to hit a ball. 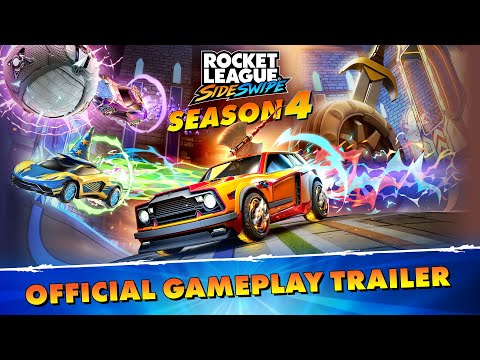 Another cool addition this time around is the new game mode being added with Season 4; Mutator Madness. It will feature tons of randomized “mutators”, or modifiers, to your typical match. Things like flipped gravity, square balls, unlimited boost, a tire as the ball, and much more. This is sure to add some spice for anyone who's finding the typical match structure a little too normal for their taste and want to let loose with a mode more directed towards comedic matches.

A really cool feature being introduced in this season is the addition of Crossover Challenges, which will let you unlock items that can be used in both Sideswipe and the original Rocket League by simply linking your Epic Games Account. This will let mobile players who also dabble in the console version finally have a way to link the two and get plenty of rewards in both.

So, with all this new content on the horizon, now’s a perfect time to dig your teeth into Rocket League Sideswipe. If you’d like to try it out yourself, you can find it for free on the App Store and Google Play.

Do you love the high-octane, fast-paced gameplay of Rocket League? Why not check out our Top 25 best sports games for iOS then?
Next Up :
Cookie Run: Kingdom's latest update introduces the Financier Cookie alongside Chapter III of the Cookie Odyssey and new in-game mechanics