Plarium's Raid: Shadow Legends has announced that former UFC Bantamweight World Champion and current WWE superstar Ronda Rousey will join the game as a Legendary Champion. Starting today, her character is available for free to everyone.

To add her to your roster, you must log into the game for seven days between now and February 28th. On top of that, you can opt-in to snag promo codes that will unlock additional Ronda-related goodies. After February 28th, only new players can obtain the character through a special event that will run until May 15th.

Ronda will take to her Facebook Gaming channel over the coming weeks to talk more about the character. There she will discuss the design influences and the Champion's skills and move sets.

Discussing Ronda's arrival in Raid: Shadow Legends, Ronen Gross, VP of business development at Plarium, said: "We are thrilled to have one of the world’s most renowned athletes join the ranks of RAID’s Banner Lord Champions, a title she is already quite familiar with in her career.” 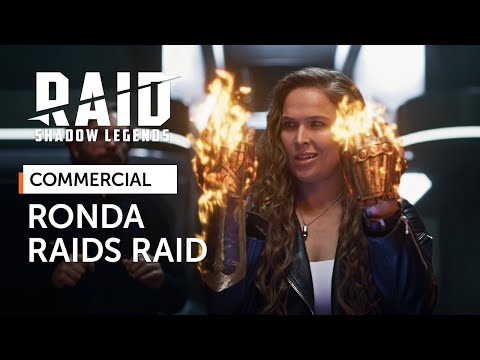 "Her love of gaming and natural gifts in mixed martial arts, judo, and wrestling made this partnership a perfect fit. As expected, her Ronda Champion will mete out punishment with fiery gauntlet fists, similar to her real-life counterpart, and will be a valuable addition to any team.”

If, for whatever reason, you're not all that keen on adding the submission expert to your roster, Raid: Shadow legends has over 700 champions to choose from. Each is usable across several game modes, including the single-player campaign, Dungeons, the Arena, Faction Wars, Doom Tower and Clan vs Clan Tournaments.

Raid: Shadow Legends is available now on the App Store and Google Play. It is a free-to-play game with in-app purchases. You can download it for your preferred platform using the links below.

On the hunt for more excellent RPGs to play on the go? Here are some of the best available for iPhone and iPad
Next Up :
Buddy Bow reveals what people think about you as prompted by a set of questions in a party game, out now on mobile