Clear through stages and collect guns with these tips

Be the ultimate hitman and shoot down other bald hitmen from the comfort of the back of your truck. That's it. That's basically what Rage Road is. And you know what? It's pretty good.

Rage Road will have you shooting down bald enemies from a variety of vehicles as you hold off your position and drive down the road. Luckily you won't have to worry about the driving, and can focus on shooting down enemies. 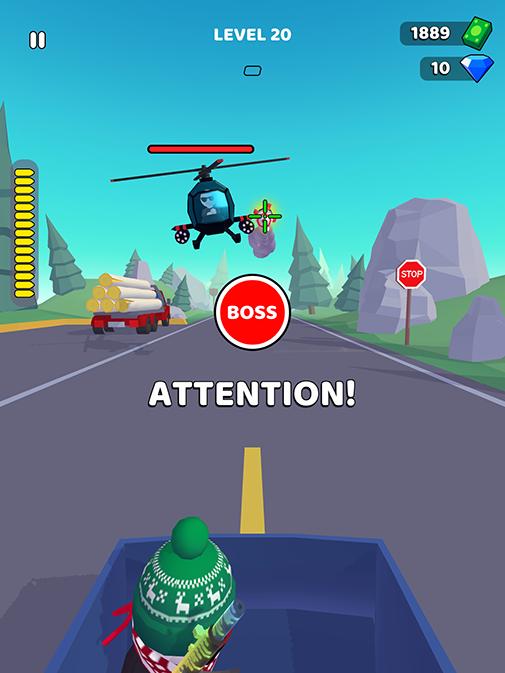 There are a variety of guns and gear to earn, and loads of levels to blast your way through, which is sure to keep you invested in the game. Now that you're sold on it, it's time for our tips.

While the game is downloading from Google Play or the App Store make sure to read our tips below for everything you need to know to shoot down enemies in Rage Road.

There are a variety of weapons to choose from in Rage Road, and while they have obvious benefits, the downsides aren't quite so clear.

For one, it's clear that the other weapons can offer larger clips and higher fire rates, which is always great. But you shouldn't use this as an excuse to aim like an amateur.

Knowing what you're up against is as important as anything else in this game, and the good news is that you can glean everything you need to know about your enemies by the kind of vehicle they drive.

Armoured vehicles will have enemies that pop up from the back, while many other vehicles can simply be overcome by shooting out the driver first.

There are also boss vehicles, but these are just bullet sponges. Shoot at them, and duck to avoid bullets, simple as that. Things only get complicated when enemies with helmets are introduced, making killing them much more difficult.

This game will make you watch a lot of ads. I hate it, but it's a fact: after almost every stage, you'll have to watch an ad. But it's okay if you get a reward for it, right?

After some stages you will be given the option of watching an ad in exchange for a gun or a piece of gear, and you should do it.

If you watch the ad, you probably won't be served another ad after. If you don't watch the ad, you're likely to the get the usual post-game ad anyway. Seemingly the game is set to not allow you to watch ads too often, so it's good to at least get rewards when they do happen.

This is what will carry you through this game. Often you will should rely on aim-assist that the game naturally gives you to nail your shots, especially when using low-clip weapons like handguns.

You can be a bit more haphazard when you have a large-clip automatic weapon, but if you're determined to be a sharpshooter, you have to back it up with the skills.

When enemies are travelling near you at a solid speed, it's as simple as waiting for them to pop up and tap to shoot them down. When they are moving at speed, you will need to adjust for the speed difference between you.