Have you ever wondered what it would be like to distill League of Legends down into a Match 3 PvP game?

A few ex-developers from Riot Games have created a new IP and a match-3 PvP game no less! The game is essentially League of Legends boiled into a match-3 setup. This upcoming game is called Puzzle Brawl and looks to be a mashup between “Empires and Puzzles” and “Clash Royale”.

The game will see players taking turns on the matchboard to create matches. To make things more interesting, the game will also include various heroes with unique skills that will help turn the tide of the match in your favour. It is completely PvP and will include guilds you can create with your friends as well. 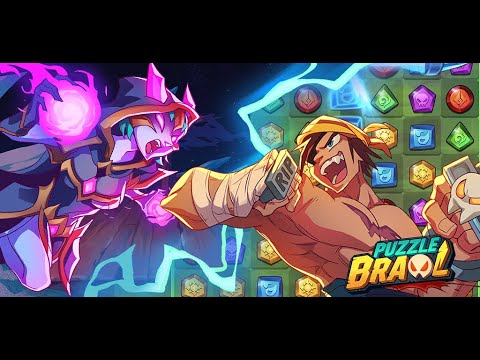 Developed by Skyborne Games, a team of three developers formed by a husband-and-wife duo, the game will use the design principles found in MOBAs like League of Legends. Puzzle Brawl promises fast-paced action and strategic thinking for mobile gamers who do not have the fortune of time on their hands.

The studio Skyborne is led by Si Yang who initially worked at Riot Games, where he worked on champions like Urgot and game modes such as co-op vs AI and Dominion for League of Legends. His wife Priscilla Tsang was a Character Pipeline Lead at DreamWorks Animation before she moved onto Riot Games as a Technical Artist. The third in our trio is Christina Gardner, the studio’s Art Director who comes from Tulsa, Oklahoma.

Puzzle Brawl is Skyborne’s second game, the first being LightSlinger Heroes, which is a bubble shooter RPG released in 2019. It was published by N3TWORK and featured on Apple and Google. However, right before the pandemic hit, N3TWORK discontinued publishing the game and our dynamic duo was left with a risky choice: taking a safer path or developing a new game. They chose to persevere, the result of which is the upcoming game, Puzzle Brawl.

Puzzle Brawl will be launching globally on the 8th of August. It is available worldwide on Android devices and is in soft launch for Apple devices in Singapore, Canada, and Australia.

Do you like match 3 games? Check out some of our favourites!
Next Up :
Marvel Contest of Champions is introducing Mantis in a new holiday-themed update

KonoSuba: Fantastic Days is introducing Vanir in a new update as the game celebrates 500 days since launch

LifeAfter launches Season 5: Power of Mutation, exploring the Third Source and its abilities