The EVE universe gets bigger

When CCP and PlayRaven announced Project Aurora at EVE Vegas 2017, the game was certainly not what the core EVE Online fan base had been expecting. Project Aurora is a strategic space MMORPG in the EVE universe, but it’s been shrunk down for mobile devices.

Condensing an intricate MMORPG experience into a mobile game is a tall order. Would Project Aurora be able to meet the needs of EVE Online’s intense fan base while paving the way for newcomers to join in? During the EVE Vegas play test, we got to try Project Aurora alongside some of EVE Online’s most devoted fans and find out. 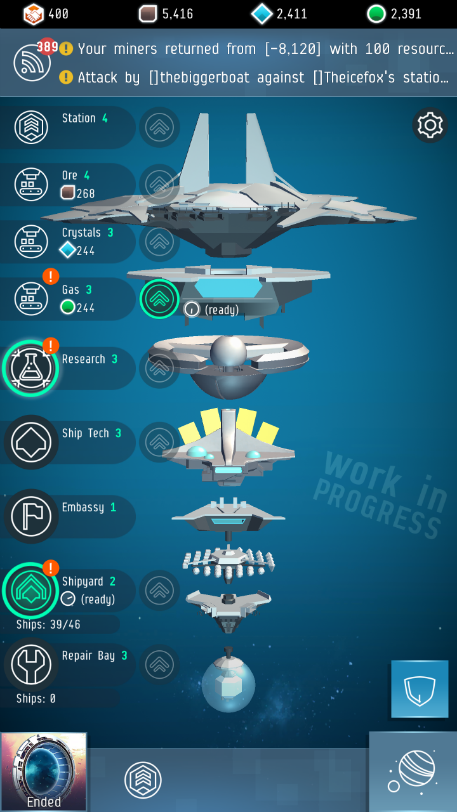 A space fleet at your fingertips

At the start, Project Aurora places you into a corporation, plopping you into just one hexagonal space on a sprawling star map. Player stations are clustered together by corporation, though you’re free to explore anywhere you like, or even infiltrate rival corporation territory.

There’s no tutorial, at least in the pre-alpha build we had access to, but it’s easy enough to jump in and get started. There’s a plethora of upgrade options to begin work on -- build up your capacity for research, mining, or boost your ships’ defenses and fire power. You’ll soon be caught in an addictive chain of upgrades as you work to create a powerful space fleet.

While all of that’s happening, you can send ships out to mine for resources like crystals, ore, and gas, which you’ll need for said upgrades, or simply explore the map. It all feels quite intuitive -- drag your finger across the map to locate a point of interest, or pinch to zoom in or out to see more.

Points of interest will be marked with a yellow bubble with an exclamation point, which you can tap to zoom the camera to that point. Return to your station by tapping a similar "home" bubble. The game’s huge scale is easy to manage even on a smartphone screen.

You can play as a free agent, or join in on corporation activities. Aurora features text chat that allows you to interact with your corporation and the galaxy at large, making it easy to organize, or simply share ideas and strategies, which was something we saw a lot of fans doing during the play-test. 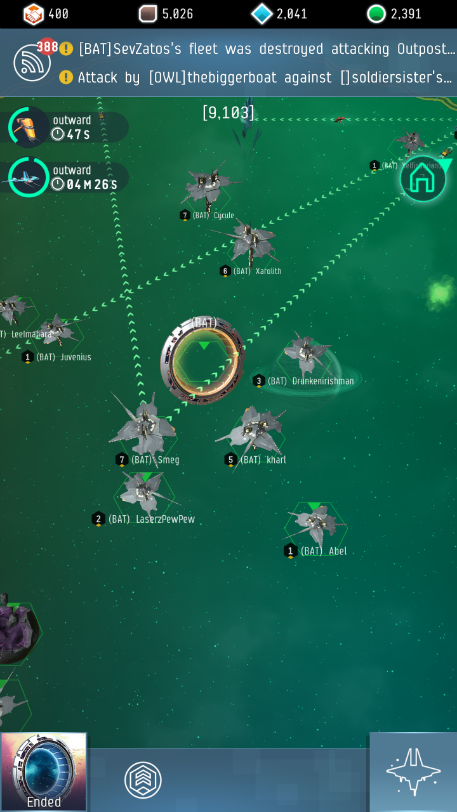 Day-to-day mining and exploration aside, CCP has been working hard to allow the epic battles and player-driven politicking of EVE Online to play a large role in Project Aurora, too, and we saw quite a bit of that this past weekend.

You have access to a good bit of the star map from the get go, allowing you to trek into enemy territory and start attacking rival outposts or mining other corporations’ moons for ultra-rare, highly coveted relics.

The game sends out regular updates when an attack is on, giving you an opportunity to send reinforcements and support, and ultimately get in on the action. These random attacks give Aurora an urgent feel that’s quite exciting.

With private corporation only chat, too, it’s easy to set to scheming for some high-stakes drama, which helps Project Aurora maintain that EVE Online feel.

Project Aurora has a lot of potential to grow into a deep, tactical MMO experience on mobile. It performs well in pre-alpha and it’s easy to pick up and put down at your leisure.

We’re interested to see some of the game’s deeper systems at play in future play-tests, or when the game enters soft-launch, potentially at the end of this year. CCP and PlayRaven are on the right track to finding that sweet middle ground that will appeal to both hardcore EVE players and newcomers to the universe.

The EVE Online universe is coming to mobile! (And here are all the screenshots)