Weezing heading up the industrial revolution

A whole host of Pokemon Shield and Sword details were revealed today including new Galarian Pokemon forms alongside two new Pokemon. We also learned about two more of our rivals and a few other bits.

The most interesting news was the Galarian forms that were revealed. These are variants of existing Pokemon that have adapted to life in the Galar region. First up there's Weezing's new form which sees the gaseous ball becoming a poison/fairy type. It's going to be a divisive design but I think it's genius.

Next up is a more straightforward looking variant in the Zigzagoon family. Both Galarian Zigzagoon and it's evolution Linoone are  normal/dark and will sport a new black and white new look. However, it will now also have a third evolution called Obstagoon, which looks like a badger who lifts daily. For more detailed info check out the official site. 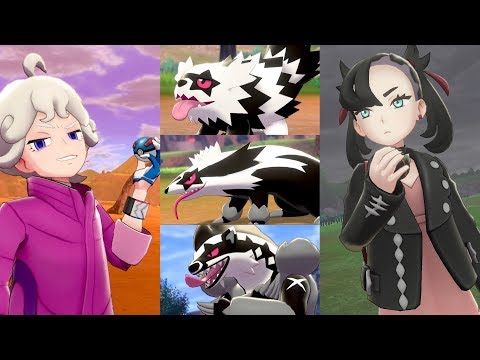 An entirely new Pokemon was also announced called Morpeko. This form switching Pokemon is electric/dark and resembles a hamster. It's two forms are linked to the ability Hunger Switch. When Morpeko experiences prolonged hunter it will switch to Hangry mode which will change the type of its signature move Aura Wheel from electric to dark.

Two new rivals were also revealed called Marnie and Bede. Not a lot of details were shown about these two except that Marnie will have fans called Team Yell, who will fulfil the role of Team Skull in the last entry, Sun and Moon.

Finally, there will also be Poke Jobs where you'll be able to send your Pokemon out to complete tasks which will earn them experience and potentially bring back rare items.

Pokemon Shield and Sword is out on 15th November on Switch. If that's too long to wait for a Pokemon fix then Pokemon Masters is out at the end of this month.