Niantic has announced several spooky events that will take place in Pokemon Go this month to celebrate Halloween. Among other things, we can expect to see more Ghost-types and generally creepy Pokemon appearing in the wild, which is great. They're the best ones. 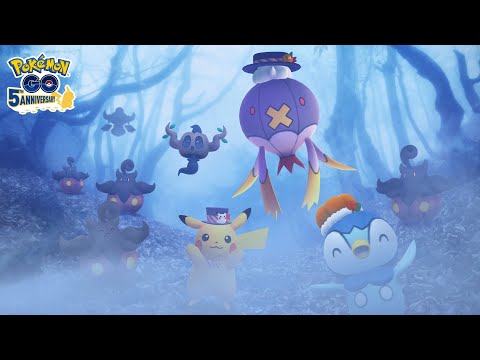 Meanwhile, from October 22nd to 31st, players will run into more Murkrow, Purrloin, and Litwick. They can also find Phantump and Pumpkaboo, who are making their debut in Pokemon Go. The latter can also come in various sizes, much like it does in the core Pokemon games. A Collection Challenge will coincide with this, tasking players to catch different sized Pumpkaboo.

The two Ghost-types aren't the only Pokemon making their Go debut either. Players will soon be able to evolve Galarian Slowpoke into Galarian Slowking. To do so, they will need to have Dopey Pokemon as their buddy and then catch 30 Psychic-types.

The next part of the Season of Mischief Special Research story will also unlock. It's called Misunderstood Mischief and will see players continuing to investigate the Mythical Pokemon by completing tasks that will likely include the debuting Pokemon in some fashion.

Players can also complete a Special Research Story called What Lies Beneath the Mask? whilst enjoying event bonuses such as 2x transfer Candy, 2x catch Candy, 2x hatch Candy, and guaranteed Candy XL when walking with your buddy. Finally, a remix of the Lavender Town music will play each night during the event. You can hear what that sounds like in the video above.

Pokemon Go is available now over on the App Store and Google Play. It is a free-to-play game with in-app purchases.

Looking for friends on Pokemon Go? We have over 1000 new pals waiting for you
Next Up :
Illusion Connect welcomes back ZombieLandSaga faves and adds new content for upcoming first-anniversary celebrations