It’s finally here! Pokémon Go’s anticipated Mega Evolution update is now downloadable worldwide. The developers have been teasing huge changes to the special evolution for some time now. While these have been part of Pokémon Go for a while, with this new update, Mega Evolution has become much easier and more rewarding. 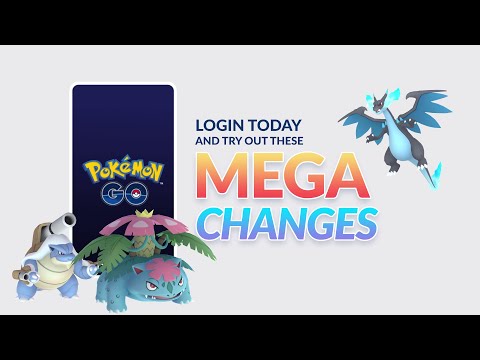 To celebrate this update, Niantic is hosting a Special Research story in-game for trainers above level five. They can choose one of Venasaur, Charizard, or Blastoise and Mega evolve them. Between today and May 1st, A Mega Moment event will also be held, promising lots of rewards for players. Pokémon with Mega Evolutions will be found more frequently in the wild and they will also have exclusive Field Research.

Additionally, Mega Kangaskhan will make its debut in Mega Raids on May 1st between 1:00 am and 2:00 pm. Spinning Gym Photo Discs will also grant up to five free Raid Passes and players have an increased chance of encountering a Shiny Kangaskhan. Finally, all Mega-evolved Pokémon over the next few days will receive a CP boost.

The difficulty of Mega Raids has been reduced, allowing fewer people to complete them and Pokémon can now be Mega Evolved from the raid battle prep screen itself. The biggest feature though is the Mega Mastery Levels. Every time a Pokémon is Mega Evolved, its Mega Level increases with each level providing greater rewards than the previous. There is an increased chance of receiving Candy XL and Catch CP for Pokémon which are the same type as the Mega Evolved one. Higher levels also decrease the Pokémon’s rest period.

It's time to evolve your Pokémon into the most powerful form ever! Download Pokémon Go for free on the App Store and Google Play.

Lat chance at getting free goodies by using this month’s redeemable codes!
Next Up :
Arknights has launched the 2022 Thank-You Celebration event with new side story Near Light

Pokemon Go Fest 2022's next stop is at Nakajima Park in Sapporo, Japan

Pokemon Go's Water Festival is back with Lapras wearing a scarf, Dewpider, and more