Netmarble has just announced a new content update for Ni no Kuni: Cross Worlds. This month’s update focuses on a brand new Imprint System which can be used to, you guessed it, Imprint Equipment. This will allow players to take on even tougher challenges that are put in front of them.

To celebrate the arrival of this new update, the developers are hosting a couple of events in Ni no Kuni: Cross Worlds. Since the Imprint System forms the core of this update, it would only be fair if players were tasked with finding these Imprint Medals themselves.

Players can expect to be tasked with completing numerous missions like the Swift Solutions Errands or the Familiar Arena which will give away rewards like Silver and Gold Imprint Medals on completion. These medals can, in turn, be traded in for numerous rewards.

Spending a bunch of medals will reward players with exclusive items like the Secret Juice. If players manage to purchase all the available items, then a hidden reward will unlock – they will now gain access to an exclusive four-star Equipment Selection Chest that contains prized possessions like Light and Darkness Equipment. 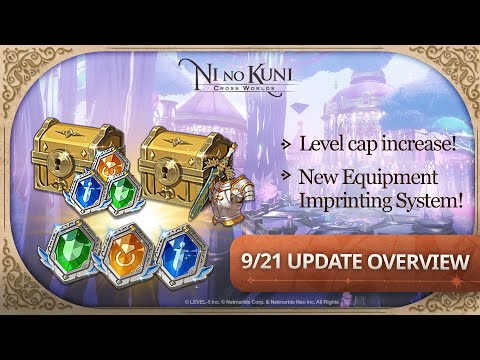 The second event is one which inquisitive souls will love for it is a treasure hunt. In Cross World’s Treasure Hunt Event, players will find themselves looking for Treasure Hunt Compasses which are located in the Duel Yard.

Of course, the path to them will not be easy because players will be forced to clear the Power Up Dungeons if they want their hands on the final reward. These Compasses are like puzzle pieces and can be used to unlock a slot on a board full of goodies like Superior Weapon Enhancement Stones, Familiar Summon Coupons, and Equipment Summon Coupons.

Finally, those who have already reached the endgame have reason to play as the update has raised the max level cap, allowing veterans to enjoy the world once again, with their newly Imprinted Equipment. These items will also be crucial when completing the new Chaos Field Dungeon called Aquarius's Ancient Castle.

Get your Imprinted Equipment now by downloading Ni no Kuni: Cross Worlds for free.

Also, check out this list of the best multiplayer games to play on mobile!
Download now!
Ni No Kuni: Cross Worlds

Next Up :
MapleStory M's September update introduces new Blaster class alongside a flurry on events and improvements