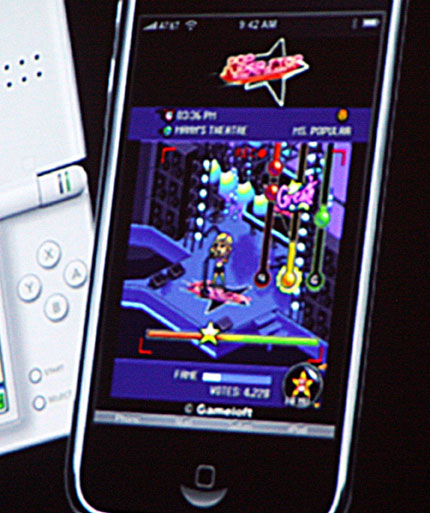 Alright, we admit it: we could be going out on a limb here. But during Gameloft boss Michel Guillemot's keynote GDC Mobile speech today, the iPhone featured in several of his slides.

And yes, the image he used showed a game running on the device. Now, it was probably a mock-up - perhaps Gameloft simply slapped an existing screenshot onto the iPhone.

Or perhaps it didn't. Have a look: the user interface certainly looks like a real game while the game graphics are reminiscent of the NiGHTS games or perhaps Pop Superstar, but we can't be sure.

Most annoying is the title which definitely starts with the word 'Pop' but then becomes a mush of pixels.

What we do know is that Apple hasn't yet announced its plans for official iPhone downloadable games. But judging by its work with iPod games already, Gameloft is likely to be one of the launch partners.

So, without wishing to jump the gun, FIRST IPHONE GAME! LOOK!