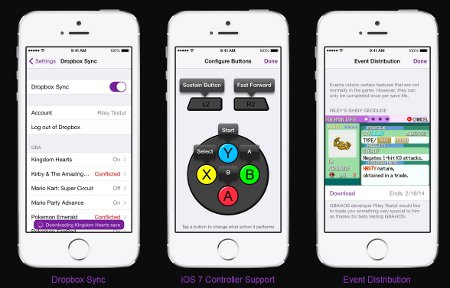 Like a legal grey-area phoenix rising from the copyright infringement ashes, GBA4iOS is back available to download after an official slap on the wrist from Nintendo.

The app, which is a bit of a fiddle to actually get installed on your iOS device, lets you play ROMs of Game Boy Advance games on your iPhone. And as you can imagine, Nintendo was a bit miffed about that.

So the big N sent a Digital Millennium Copyright Act (DMCA) notice to the developer of the app telling it to take it down.

The problem arose not because the app enabled people to play illegally downloaded games, because that's not actually against the law, but because it, and the website you can download it from, pointed you to a site where you could grab these shady ROMs.

The new version of the app, which is called GBA4iOS 2.0.4, now just points you in the direction of Google and lets you find your own ROMs.

We doubt this will be the end of the matter, but for now if you want to play some GBA games on your phone, GBA4iOS offers you that chance.

Obviously we can't condone your actions though. Naughty.

AppAdvice
Next Up :
Rivengard, a fantasy RPG by Snowprint Studios, is featured in Apple's Founder's Campaign alongside an assortment of other great games