Almost a year ago to the day I summed up NBA 2K13 by saying, "Sub-par controls and uneven presentation keep 2K's NBA series from finding the net for another year."

This year, 2K Games comes closer to delivering a quality mobile basketball game, even if it fails to address many of the issues that worked against its predecessors.

The result, while not quite perfect, is an enjoyable pocket-sized diversion that looks and plays like a basketball game should.

The virtual joystick controls in NBA 2K14 are still glitchy. The joystick overcompensates for small movements, and buttons for 'pass' and 'shoot' are unreliable at best.

Happily, however, the touch controls (which have been renamed 'one-finger mode') have received a huge boost in terms of responsiveness and work a treat in this year's offering.

The option to enable them is hidden at the bottom of the 'team select' screen as a checkbox. If you can figure out where to find it, you'll be pleased you did as the touch controls allow for easy play-calling - a feature which is notably absent from the virtual joystick setup.

Once you master the basics (tap a player to pass to him, press and hold a player with the ball to shoot), the touch controls are the best way to experience NBA 2K14, as they're quick and responsive enough to accommodate the fast-paced action of a full-court press.

The Classic Games mode of NBA 2K13 is curiously missing from NBA 2K14 and has been replaced by a story-driven 'LeBron: Path to Greatness' Mode which introduces a curiously MOBA-style of gameplay that lets you play as a legendary character. 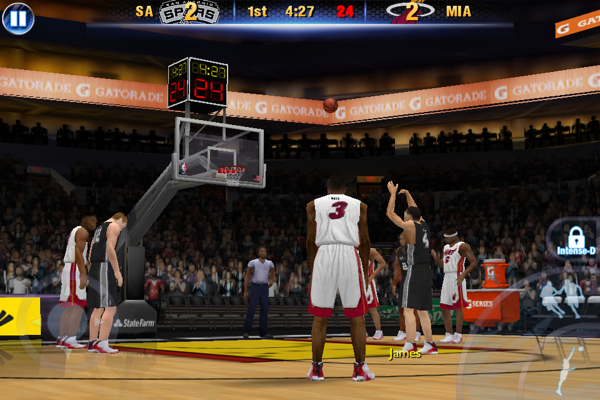 The main line-up of the Miami Heat moves around your own LeBron, who is incapable of doing anything wrong on the court.

It's nice to play as a heavy, admittedly, but once a teammate passes you the ball you are become death - slammer of dunks, as you charge down the court or sink three-pointers with wanton abandon.

It's an intriguing concept for a story mode, and one that breathes a bit of much-needed life into NBA 2K14 with a polished voice-over section and a novel form of gameplay, but LeBron's (rightful) prowess still seems a little out of balance as he hits just about every shot you make with him.

The creepy, even-tempo crowd remains unchanged this year, and it looks all the worse when compared to the updated player graphics. They now cheer whenever there's a turnover, which is progress - I suppose - but they still look and behave like a forest of cardboard zombies.

Worse than this, however, is a bug that prevents the announcer from calling plays as they happen. Instead, he chooses to build up a reserve of five to ten calls which he then vomits out at random.

The effect is unsettling to say the very least, but once the announcer finds his pace so too does the game.

NBA 2K14 ultimately succeeds where last year's instalment failed. Sure, the joystick controls are still a bit sticky, and it's still a bit of a hard sell at £5.49 / $7.99, but if you're a basketball fan in general or a LeBron fan in particular you'll find something to enjoy in NBA 2K14.

There's still plenty of room for improvement with patches and bug fixes, but NBA 2K14 shows signs of improvement
Next Up :
DC Worlds Collide review - "DC fan service in an enjoyable gacha package"