Mr. Vampire is an unusual puzzler that makes you play as an immobile vampire that can cast only two spells

EnerDC has recently launched its ricochet puzzler – Mr. Vampire – Physics Puzzles on Google Play. After having worked on it for a while, the developers have finally released the completed edition for all Android users. The game makes you play as a vampire, but it doesn’t give you that standard blood-sucking, transforming into a bat, can’t be seen in mirrors and cannot survive in sunlight kinda experience. Mr. Vampire is an unusual take on vampires because he’s completely immobile in this version.

Mr. Vampire – Physics Puzzles has been developed by EnerDC Games, a small indie studio from Burgas, Bulgaria, whose primary goal has always been to create educational 2D games. With this game also, the developers force players to put on their thinking caps to solve challenging puzzles based purely on ricocheting.

This immobile vampire that players can play as has only two castable spells – one that transforms all living things including himself into an animal, and another that transports the vampire to the ceiling. In this Angry Birds-esque adventure, your goal is to transform animals in order to match Mr. Vampire’s recipe on top of the screen. The catch is that transformations occur randomly, so players will have to keep casting the spell until the desired transformation is reached. 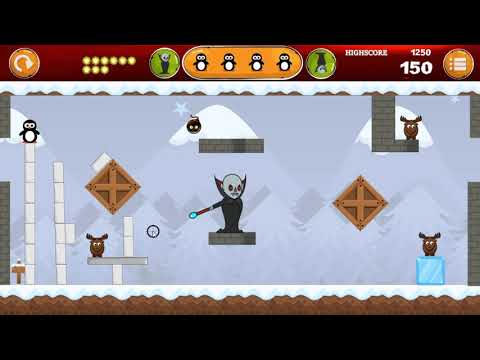 Although, that isn’t the only challenge players will face. Mr. Vampire and the animals are also separated by numerous physics-based objects that are capable of reflecting the spells and bombs that add a whole new dynamic. The game is easy to understand but levels get progressively harder with the last 10-15 being a real doozy. Currently, special Christmas-themed levels are also active.

Transform yourself into an immobile spell casting vampire by downloading Mr. Vampire – Physics Puzzles on Google Play. The game is free-to-play and features no ads or in-app purchases. Currently, there are no details about an iOS launch.

On the lookout for games that tickle your brain? Then check out this list of the best puzzle games to play on mobile!
Next Up :
Code Atma is celebrating a supernatural New Year with the release of a new Atma Melanta and holiday-themed events