Take it for a spin

Mini Motorways is the latest game from the wonderfully named Dinosaur Polo Club who you may know from the excellent Mini Metro. Mini Motorways follows the same setup as its predecessor except that this time you'll be creating road networks instead of railways. It will be available on the upcoming Apple Arcade when it launches on 19th September or tomorrow if you're reading this at the time of writing.

Traffic is something that's irritated all of us at some point. Even if you don't drive the chances are you've been stuck on a bus for far longer than you'd hope because of traffic congestion. Mini Motorways will give you the opportunity to prove that you know better than whoever designed the place you live.

The game will start off fairly simple with only a few buildings that you'll need to connect together by road. But eventually, the city will start to grow, presumably as more people flock to a town with a road network that isn't dreadful. All the different cities in the game are based off real-life locations, so you can show Elon Musk that tunnels aren't necessary to sort out LA. 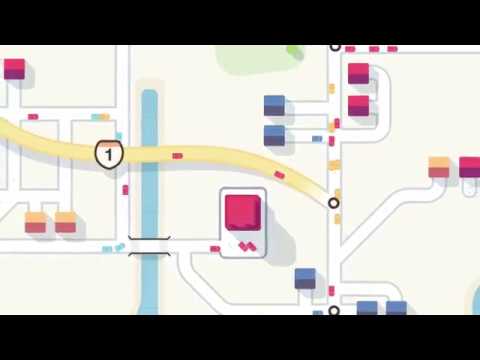 New building developments mean new roads will be needed so you'll have to expand them to cater to these new places. All the while, you must make sure that traffic still flows without issue. Much like Mini Metro, you'll be aiming to be as efficient and optimal as possible which will likely become more challenging as the city expands.

It's all presented with a nice minimalist art style with predominately white backgrounds and block colour for cars, buildings, bridges and rivers. It makes everything easy to identify at a glance so even when things get more chaotic you shouldn't have too much difficulty telling everything apart.

What I love and hate about Mini Motorways