A recent update has sparked another interesting controversy

In the aftermath of the Star Wars Battlefront II loot box controversy, it looks like Marvel Future Fight's most recent update added more than just a few new characters to the mix with their new inclusion of Ultimate Hero Chests. Obvious to say, fans of the game aren't too chuffed. 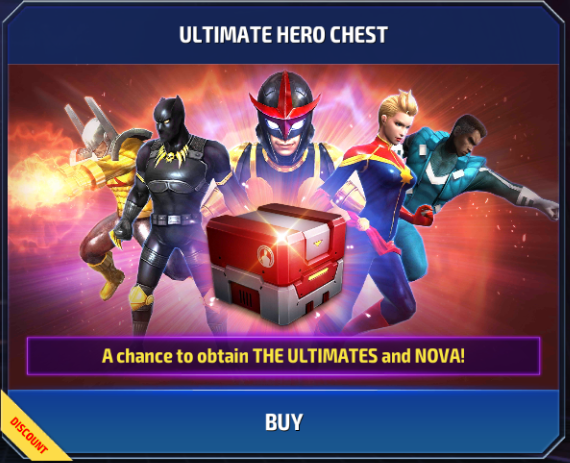 Given that Marvel Future Fight is free to play, I won't insult anyone by saying that IAPs aren't a thing. No, if you don't want to grind for a character you could just use the bio selectors and buy your desired heroes outright. Not plausible for everyone, but it's still an option alongside getting different gear from free chests and Hero Chests. If you did want to splash out, usually your reward was worth what you paid for it.

The difference this time around with the introduction of the Ultimate Hero Chest is that you only have a chance to get Anti-Man and Nova, two of the best characters in the game. Blue Marvel is available to unlock, but you need to pay to unlock his full potential via bio selectors.

Understandably, the MFF community has banded together in light of this new update and the direction it's pulling the game in. Bill Rosemann, Marvel Games' Executive Creator, Tweeted out in response to the backlash saying: "Hello @Marvel_FFightUS fans! We hear your voices and are working with Netmarble to address your concerns. Thank you for your patience and passion!" So far there's been no further comment.

Apart from its huge boycott mega-thread on the the game's subreddit, the app's App Store and Google Play store pages are receiving a tide of one-star reviews from all levels of players. Such comments include:

"This game was always my favorite but it is coming to a point where am I have to let it go because they have no consideration for the players and only think about putting money in the wallet." - Josh V.

"I'm perfectly fine with the idea of purchasing things in game, as long as you know what you're getting for it. That there are characters locked behind a RNG paywall means I can buy one or one million chests and still not get a single biometric for those toons." - Ryan V.

"Just NO! Dear Netmarble, I love this game, but, this update is not taking the lesson of EA and BF2 to heart" - Knight G.

What do you guys think of Netmarble's latest direction? Should it have learnt from EA's backlash? Let us know in the comments below.