Kabam has announced the official premiere of its Champion Reveal Trailer for Marvel Contest of Champions, which you can feast your eyes on in the embedded clip below. The action fighting game on mobile will soon feature Captain America (Sam Wilson) and Misty Knight joining The Battlerealm, letting players fight the good fight against Galactus.

In the latest update for Marvel Contest of Champions, Captain America (Sam Wilson) and Misty Knight take in survivors of Galactus' attack on Hell's Kitchen in an old Helicarrier. This new community will keep both heroes and villains safe, and the neutral hideout will be aptly called Safe Haven. The peace doesn't last for long, however, so it's up to Sam and Misty to set things right.

Misty boasts unblockable armor-breaking damage and multiple frostbite stacks among other skills, while Sam can add a physical vulnerability debuff to boost his physical damage output. His Airstrike skill can also deal instant rupture damage and debuffs for the ultimate offensive strategy. 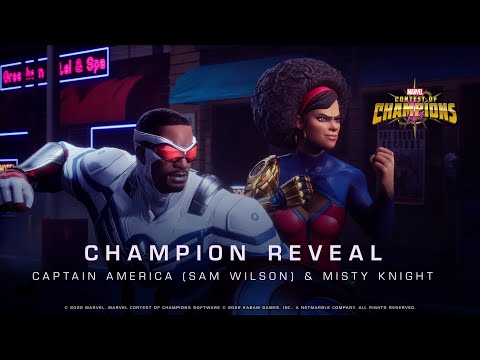 To top it all off, a new show will premiere on the Mojo Network this February, where players can complete new quests and acquire Mojo Bucks that can be used to redeem various in-game goodies in the Mojo Television Network Store.

If you're eager to see Sam and Misty in action, you can download Marvel Contest of Champions on the iOS App Store or on the Google Play Store for Android devices. It's a free-to-play game with in-app purchases. You can also visit the official website for more information on the V33.3 release notes.

Are you on the hunt for more adrenaline-pumping action games that will put your skills to the test on your mobile device? Why not take a gander at our list of the top 25 best action games for iPhone and iPad (iOS)?

Next Up :
Play Together is hosting the metaverse's music talk show L1STEN today and tomorrow