Uses Tempests and Prowess effects to crush the competition

Marvel Contest of Champions' giant roster of Marvel's heroes and villains continues to grow with the announcement of its latest fighter, a special variant of fan-favourite X-Men member Storm.

What makes her addition all the more interesting is that she isn't the Storm you know, having left the X-Man after being indoctrinated into Pyramid X by the dastardly Apocalypse. You might remember a similar storyline playing out in the recent X-Men: Apocalypse, which was the first real dud in the leadup to the entire film series diving off a cliff with Dark Phoenix. 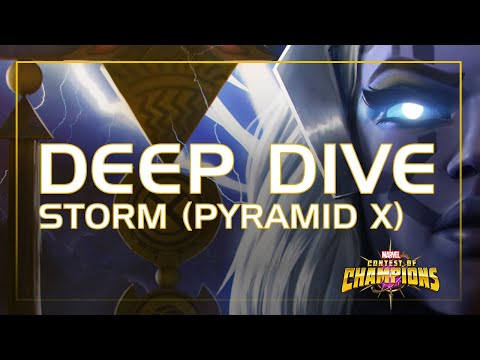 This particular take on Storm can channel her powerful weather-bending abilities through her ornate wand, known as Heset's Ruin. Instead of using her powers for good, she's now in the habit of razing entire cities and subjugating those who refuse to bend to En Sabah Nur, otherwise known as Apocalypse.

Her two most important combat elements are Prowess and Tempests. The latter can be selected within the pre-fight screen and provide her with special passives, immunities, and attack bonuses. Not bad.

Prowess effects empower the special abilities offered by Tempests. Those looking to win as Storm should apparently focus on building as many Prowess effects as possible before then unleashing some all-powerful special attacks. Be sure to check out the pic above for more info on her synergy bonuses.

Marvel Contest of Champions is now available for download as a free-to-play title from over on the App Store and Google Play. It's worth a go if you're a fan of the comics or films, or if you're in the market for a polished mobile fighter. It's also nice to see the game still going strong over five years after launch.

Looking for more top-tier fighting games on mobile? Here are 25 of our favourites for iPhone and iPad
Next Up :
UFO99 lets you battle block monsters and collect pixelated critters, out now on Android