It’s time to welcome the dimensional hopper, America Chavez, to Marvel Contest of Champions. For those who don’t know, here is her in-game description:

"America Chavez was born in an alternate dimension outside of time and space, the Utopian Parallel. Being a Dimension in close proximity to the Demiurge, America Chavez absorbed powerful mystical energies which granted her the ability to willfully travel through alternate Dimensions."

America Chavez is a Mystic class character who receives her strength from buffs and specializes in repeated heavy hitting combos. She can open parallel dimensions by using her special attacks which will also improve her base stats. 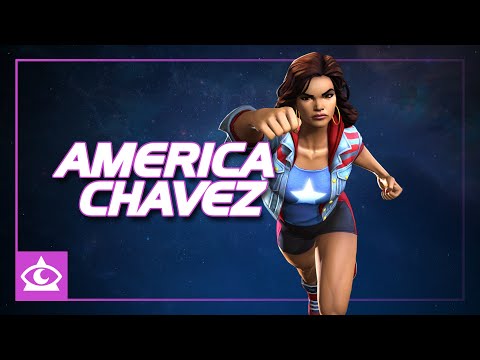 Chavez uses the opponents’ buffs to strengthen herself. Her own Attack Rating and Energy Resistance increases with each buff that her opponents have active. Meanwhile, she can activate the Negative Zone which will reduce the opponent’s Ability Power Rate.

While she is capable of reducing her opponent’s Ability Power Rate, any effect that reduces her Ability Power Rate will prevent her from launching multiple special attacks, the crux of her abilities. She also is completely ineffective against common Defender mechanics. Against them, she will not be able to maintain her momentum and her parallel dimensions will eventually fall off. So, pick your battles with this character carefully.

To utilize America Chavez to her maximum potential, here are some abilities you should focus on mastering:

Another cool fact about America Chavez is that she’s set to appear in Marvel’s Doctor Strange 2: Multiverse of Madness!

Play Marvel Contest of Champions and familiarize yourself with America Chavez by downloading the game on the iOS App Store and Google Play Store.

Also, check out these new action games for mobile!
Next Up :
Play Together reaches 10 million downloads, introduces new features and a global Partner Program for content creators