Knights & Slimes takes a throwaway enemy that you'd typically not think twice about taking on – the humble slime – and turns it into a deadly, constantly evolving menace. These slimes come in many sizes and varieties, and by thoroughly exploring this concept, developer Monte Boyd offers a near masterclass in how to gradually and successfully build upon the simplest of premises.

Hit a slime and it'll split in half, leaving you with two smaller slimes. The idea is that you keep attacking them and they keep multiplying until they've been whittled down to nothing. Attacks are automatic, so all you need to do is get close and make sure you're facing them. Combos can be built easily by hitting slimes back to back as they land, and powering through a packed screen of them while wildly flailing an axe overhead could not be more satisfying.

If a slime does come into contact with any part of you that isn't your weapon, you die. Big no-nos include jumping on them, attempting to headbutt them from a lower platform, backing up into their face (do slimes even have a face?), and forgetting to dodge after sending two new slimes skyward. Things can turn ugly fast, with some later stages feeling almost too hectic from both a visual and gameplay standpoint. Still, it's often exciting and does a stellar job of keeping you on your toes.

Control woes are minor but still present. Not being able to descend a platform without walking to its edge can cause a bit of frustration, and while the directional on-screen keys tend to work more often than not, they still lack the reliability of a physical controller. You'll likely be able to work around most of these smaller issues, but the bosses in particular can demand a level of precision that the touchscreen controls struggle to allow for.

To add to the already sizeable challenge, Knights & Slimes is really more of a roguelike than a traditional platformer, with death regularly booting you back to square one. Every stage is made up of 10 levels, almost all of which seldom last longer than a minute. And so due to the small time commitment required in each run, dying rarely feels overly disheartening. 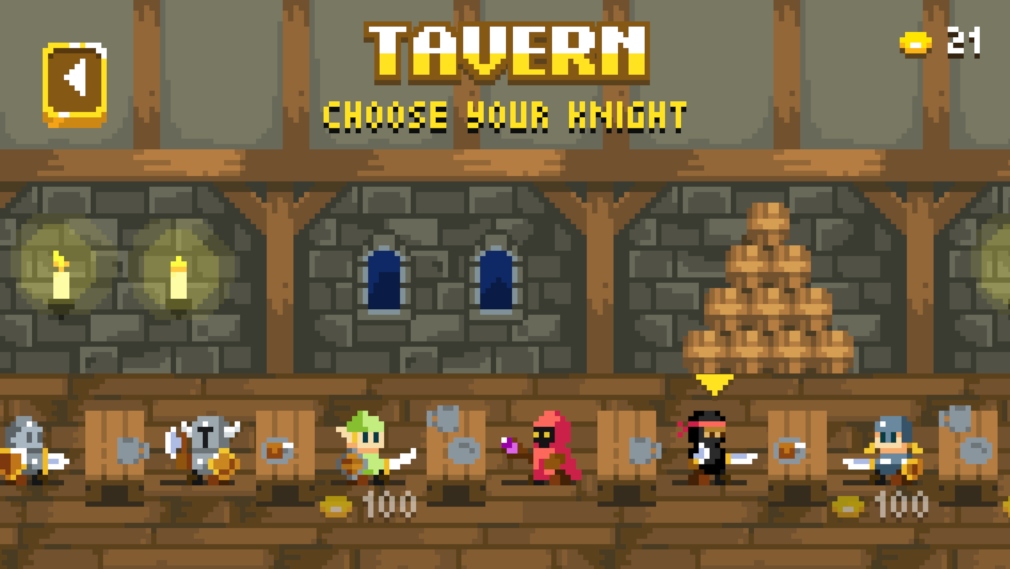 When not besting slimes, it's usually a good idea to keep an eye out for gold coins scattered throughout the levels. While you can't use them to buy upgrades or anything quite as game-changing as that, there are instead an impressive 20 different playable characters to throw your money at. Again, these guys don't mix things up all that much, but it's never not fun to play dress-up as a ninja.

New slime variants are introduced at a quick, though still manageable, pace, and bosses always arrive just in time to knock you down a few pegs. Special weapons, such as a rapid-fire bow and heavy axe, can be found dotted around the place, and weather/environmental effects – think blizzards and lava storms – can be used to get a leg up on the competition. Though even with these fairly regular additions, getting to the end can start to drag.

Attack of the IAPs

Perhaps this was partly due to my reluctance to buy additional permanent lives in the game's IAP store, but I don't feel one should need to purchase what equates to an "easy mode" just to keep a game feeling fun. I look forward to the inevitable Switch port, which will hopefully craft a selection of difficulty modes from this additional lives idea.

As things currently stand, Knights & Slimes is a very good game that will surely become great once/if made available on Switch. I'd still absolutely recommend it for its moreish gameplay loop, generous amount of varied and well-presented levels, and constantly evolving enemies, but it's hard to kick the feeling that this isn't quite the definitive version of what could one day be hailed as a minor classic.

Please, Touch the Artwork, the Zen puzzler about abstract art, is out now on Android and iOS