Artifex Mundi's Irony Curtain: From Matryoshka with Love is the latest attempt at resuscitating the point-and-click genre; one that, while well-intentioned, struggles to build its light-hearted satire of decidedly serious issues toward a considered and impactful payoff.

The story here revolves around a young American journalist called Evan who, after giving a speech on the benefits of socialism and the "great" communist country of Matryoshka on live TV, is invited over to meet his hero, the country's leader – the game's none-too-subtle stand-in Stalin. It doesn't take long for Matryoshka's divides to be made clear, and Evan is soon embroiled in a potential uprising against the man he once idolised.

Gameplay is typical adventure game fare. You'll run around completing errands, snapping up important oddities as you go. Most of the puzzles follow the same sort of illogical logic that'll be familiar to any LucasArts and Daedalic Entertainment fans. What makes them more tolerable, as is the case in the best examples of the genre, are the ridiculous scenarios they're a part of.

The pedantic, bureaucratic nature of Matryoshka's systems and inhabitants means that even the smallest of issues can be blown well out of proportion, resulting in a chain of increasingly ludicrous puzzles. During one section, as part of a larger puzzle, you're even required to fill in a drawn-out form to enter a hotel's bathroom. 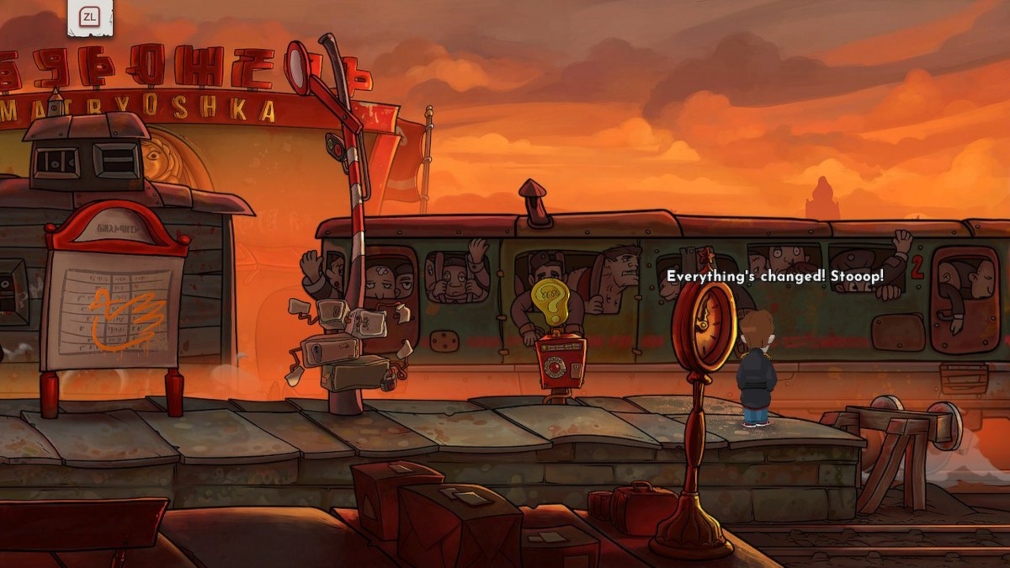 So it's unfortunate that Irony Curtain's best moments are regularly undercut by its strangely finicky controls, with some environmental objects requiring you to awkwardly shuffle around them in the hopes that a button prompt will eventually appear. Likewise, the juddering framerate present in certain moments is indicative of a port that could have done with a bit more time in the oven.

There's also too much faffing about in menus, and, in typical adventure game fashion, some of the later puzzles are obtuse in the extreme. Thankfully, most of the frustration that comes with the territory is muted by the inclusion of an option to highlight every interactive object on screen, as well as phone booths from which you can call Evan's mum, among others, for hints.

Evan is unbearably naïve and self-assured, and yet he remains a more tolerable, even likeable, protagonist than your average adventure-game lead. He does have a tendency to natter on incessantly, but I suppose the hundreds of pre-recorded voice lines remain a net positive.

Similarly, the eclectic mix of hardened oddballs you'll meet along the way are memorable and distinct in their visual design and character. Though while the twisty narrative serves up plenty of bankable good guys, the targets of its satire are comparatively undercooked. 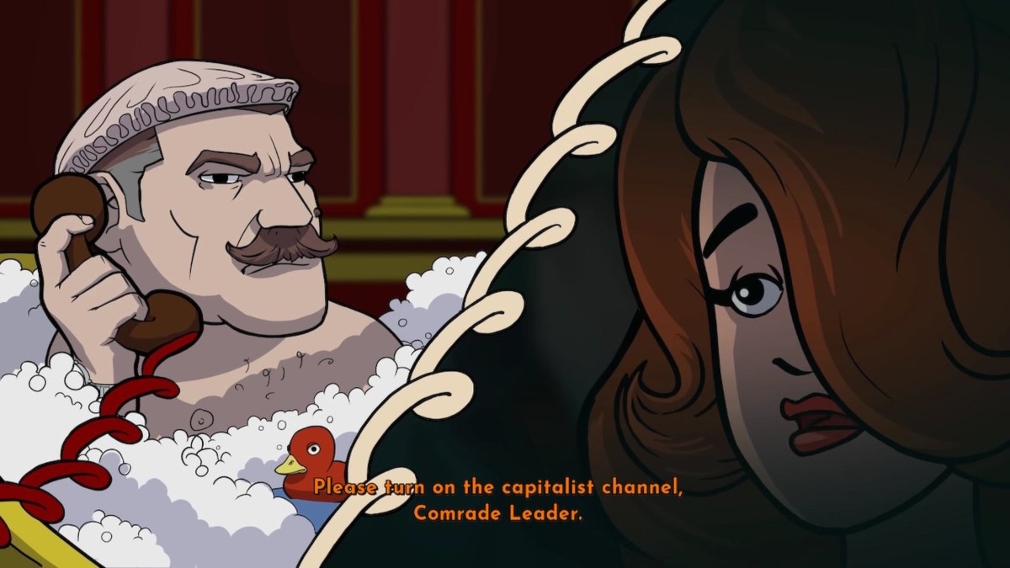 Both the game's capitalist and communist monsters are just that, never showing the twisted, stray humanity that would advance them beyond one-note caricatures. Compare it to a comic (or indeed movie) like The Death of Stalin, another work that satirises communist leaders run amok with an admittedly darker edge, and you'll see that exact balancing act done justice.

In the moment, Irony Curtain gets away with its broad strokes due to its arguably misjudged lightness of tone and the sheer onslaught of jokes with which it distracts you from any such quibbles. Though even if we are to view it solely as a broad farce, its comedy too often resembles a simplistic lecture.

Many will nod along in agreement and perhaps even chuckle from time to time, while others will deride the condescension of its more didactic moments. The problem is not that Irony Curtain is a game with a "message", it’s that there's seldom heft to anything it does and little political insight beyond that which a quick internet search could not outdo.

There are fleeting moments where you might catch a glimpse of the contemplative experience this could have been, though it's generally much more interested in being liked and easily-digestible than truthful. Starved adventure game fans are sure to find much to get giddy over, but it's a game whose tepid satire ultimately dulls all in its wake.

Irony Curtain is a competent successor to the point-and-click adventure games of yore, provided you can bear its finicky gameplay and tepid satire
Next Up :
Warhammer 40,000: Tacticus review - "An approachable strategy to a grimdark future"