Recruit Julius Caesar and Cleopatra to fight against Gnomes

The game will see you head into battle against an army of evil Gnomes who are intent on claiming the World Heart and its powerful energy for themselves. It'll be up to you to stop them alongside sieging and capturing new territories whilst constantly expanding your own empire. 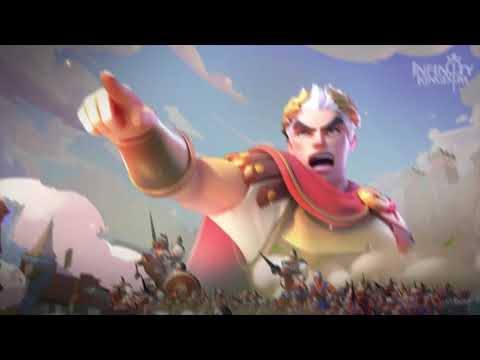 You'll be charging into battle with a plethora of well-known historical figures at your disposal. This includes the likes of Julius Caesar, William the Conqueror, Mulan and even Robin Hood. There are more than 60 characters to choose from to lead your attacks and you can check some of them out in the embedded trailer above.

These leaders' skills can be organised by Troop Type, Element and Position depending on what you're looking for at the time. Beyond simply selecting your troops, you'll be able to apply a variety of buffs to them with dragons that you can hatch from eggs and then train to help them become even more powerful.

Outside of battle, you'll be able to dispatch a series of scouts to investigate nearby Ruins. Within their confines, you can discover Stele Shards which can then be used in your Monument's to unlock pieces of Norheim's history alongside a plethora of other rewards that will be useful on your journey to save the realm from the Gnomes.

Infinity Kingdom is available now over on the App Store and Google Play. It's a free-to-play game with in-app purchases.

On the hunt for more excellent strategy games to play on your phone? Here are 25 of the best available for iPhone and iPad
Next Up :
Pokemon Masters Ex's Baking Buddies event is now underway alongside the arrival of two seasonal Sync Pairs