Identity V's crossover event – The Fifth Survivor – with the popular manga Case Closed is now live in the 1v4 asymmetrical multiplayer title. It will see players heading to Oletus Manor in search of clues to solve a mysterious case.

The crossover sees players looking to solve an unexplained occurrence at Oletus Manor. They will find themselves sporting outfits from Case Closed before being tasked with discovering the truth about the fifth survivor in the manor. Several characters from the manga will appear, including Shinichi Kudo, Conan Edogawa, Ran Mori, Shiho Miyano, Heiji Hattori, and Kogoro Mori. Each of their outfits will provide different bonuses.

Alongside the crossover, the developers have added a treasure box called The Fifth Survivor (the first tale) that contains four costumes. They are A Costume Lawyer - Kogoro Mori, A Costume Air Force - Ran Mori, A Costume Perfumer- Shiho Miyano (Ai Haibara), and A Costume Forward - Heiji Hattori. 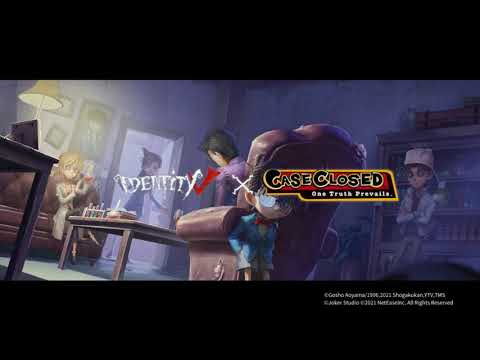 Meanwhile, by sharing KV once during the crossover, players will earn 100 inspiration awards. If they then finish the crossover task, they will win various gifts, including crossover items. They can earn five treasures maximum alongside their favourite costume.

If you're unfamiliar with Case Closed, it is a manga that follows Shinichi Kudo. He is a high school detective who is attacked by a crime syndicate called the Black Organization. They force him to drink poison that turns him into a child. He takes on a new identity, Conan Edogawa and sets off to track down the Black Organization.

Identity V is available now over on the App Store and Google Play. It is a free-to-play game with in-app purchases.

Looking for more multiplayer games to play on your phone? Here are 25 of the best for iPhone and iPad
Next Up :
Cookie Run: Kingdom introduces in-game costumes and a new cookie to celebrate Halloween