Gossamer Games has just announced an upcoming Halloween treat with Howloween Hero, an adorable adventure where you play as a curious candy-hunting canine. What could be better than dressing up in the spookiest costume imaginable and running around town looking for sugary sweets?

Howloween Hero lets players step into the shoes (or paws) or a playful pup who will stop at nothing to hunt down its owner's favorite confectionary delight. Throughout your journey, you'll meet a charming cast of characters from "vampires" to witch kids, and maybe make a few of your own friends along the way.

You can also unlock different kinds of Halloween outfits, from scary dino-dogs to your classic ghost-white cloak. You can even dress up as a spooky spider, or - heaven forbid - a mailman, your own worst enemy. Keep your friends close, eh? 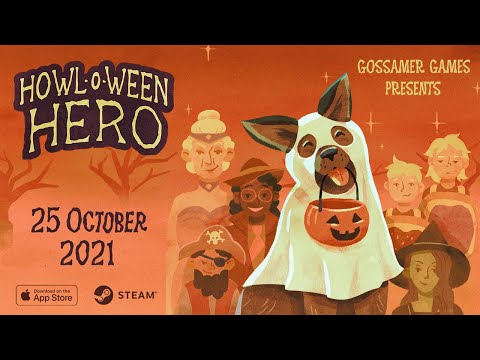 Suitable for all ages, Howloween Hero does seem like a fuss-free title that not only lets you feed the need for some sugary sweets but also challenges your doggie detective senses. There's a mystery going around town about a menacing monster doing the most dastardly deed possible - stealing candy from unsuspecting children - and it's up to you to put a stop to this threat and get to the bottom of it once and for all.

If you're eager to give the game a go, it will be available to download on the iOS App Store for $4.99 a pop on October 25th. You can also take a shot at the Steam version for $14.99, or take a sneak peek at the embedded teaser trailer above to get a feel of the gameplay.

Next Up :
MLB 9 Innings 21 is celebrating its fifth anniversary with a host of in-game events