Woobest Game's latest title Heroes of Crown offers a brand-new idle RPG experience in gorgeous 3D on mobile. With its high-quality visuals and low-key progression without the cumbersome grind, the game lets players fight the good fight using a roster of epic heroes on the battlefield.

If you’ve been eagerly waiting for the game's official release, here's everything you can expect from the visually stunning title. 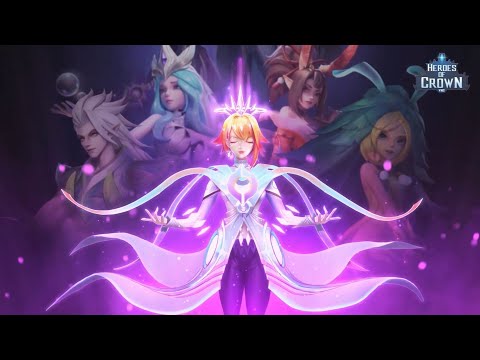 Heroes of Crown boasts full-screen battle animations and a cool skill display across 3D aesthetics and stunning character art. Plus, players can rotate character models in a 360-degree 3D view.

GPU particle effects and PBR rendering technology aside, players can also experience full-3D maps with advanced shade effects as they explore the world around them using their favourite characters from the game's epic lineup.

These models can be touched for full immersion as well. As the game is currently in its Open Beta phase, players can give it a go and experience the stunning models themselves.

Stunning heroes from across the globe

Epic heroes from Greece, Rome, Japan, Egypt, the land of Hermes and more are available for players to collect to form their own hero squad. As an added perk, a 5-Star hero is immediately up for grabs on your first draw.

If you're keen on tinkering around with the other features of the game but don't want to miss out on all the bountiful rewards you can earn from battles, you can switch between the battle screen and your main interface with the game's convenient swapping system.

In particular, tapping the button in the lower-left corner lets you manage other in-game commands while battles are ongoing. You can effectively challenge story stages and take part in boss rushes while multitasking. The best part of it all is that you can engage in auto-battles and level up your collected heroes quickly even when you're logged off the game.

Putting your skills to the test

The game also boasts an exhilarating variety of other game modes such as the Endless Abyss, Dragonspine Tower, Ancient Sanctuary, and Quick Battles. Putting your skills to the test and clearing these levels will reward you with tons of in-game goodies to fast-track your progression.

You can also fight for dominance in the Pinnacle PVP Battle, Cross-Server Championship and more. Be sure to strategise the best combos and formations for your heroes to take down your foes and climb to the top of the charts for the ultimate bragging rights.

A host of social activities

Finally, social butterflies can get their fill of social activities in the game, as there are plenty to look forward to. You can quiz with global players, experience the real-time quiz on the same screen with global players, and bet on the thrill of a comeback. And there is also a cross-server ranking competition between gangs on different servers. You can also challenge guild members at any time (without the need for the other player to be online) to get special rewards and give instant first-place likes to get special rewards.

If you're keen on joining in on all the fun, Heroes Of Crown is officially open to download via the iOS App Store and Google Play Store. As an added perk, players can expect to receive a special gift package on the official redemption page. Simply use these codes to score bountiful rewards: hero777, hero888, and hero999. These redeem codes will reward players a plethora of Ascension Stone, advanced Recruit Vouchers, and exchange coupons for collectible skins.

Be sure to join the community of followers on Facebook to stay updated on all the latest developments!

Heroes of Crown is a 3D idle RPG coming to iOS and Android on July 5th, now open for pre-registration