How to get dust and use it wisely

Hearthstone's economy has two currencies, gold and dust. Gold is easy. You earn it by fulfilling quests, plus a bonus ten for every three wins, and a hundred of it buys you a card pack. With a new quest available each day, it's quite possible to build a decent collection without spending much real world money.

Dust is more complex. You use it to make cards of your choice, rather than the blind luck of opening a pack. There's only one reliable way to get it, and that's by disenchanting existing cards you own. Since you can only have two of each card in a deck, you need something to do with the extras you collect. But it's still in short supply compared to gold.

How best to get it, and how best to spend it, is what we're going to explain in this guide.

There are four rarities of card in the game and you can tell a card's rarity from the colour of the gem in its centre. They run from Common (white) through to Rare (blue) to Epic (purple) and Legendary (orange).

The rarer a card is, the most is costs to create, up to a whopping 1600 for a Legendary. When you disenchant an existing card it's worth a paltry quarter of its build cost. Unless it's a golden version, that is, in which case you get its full value. 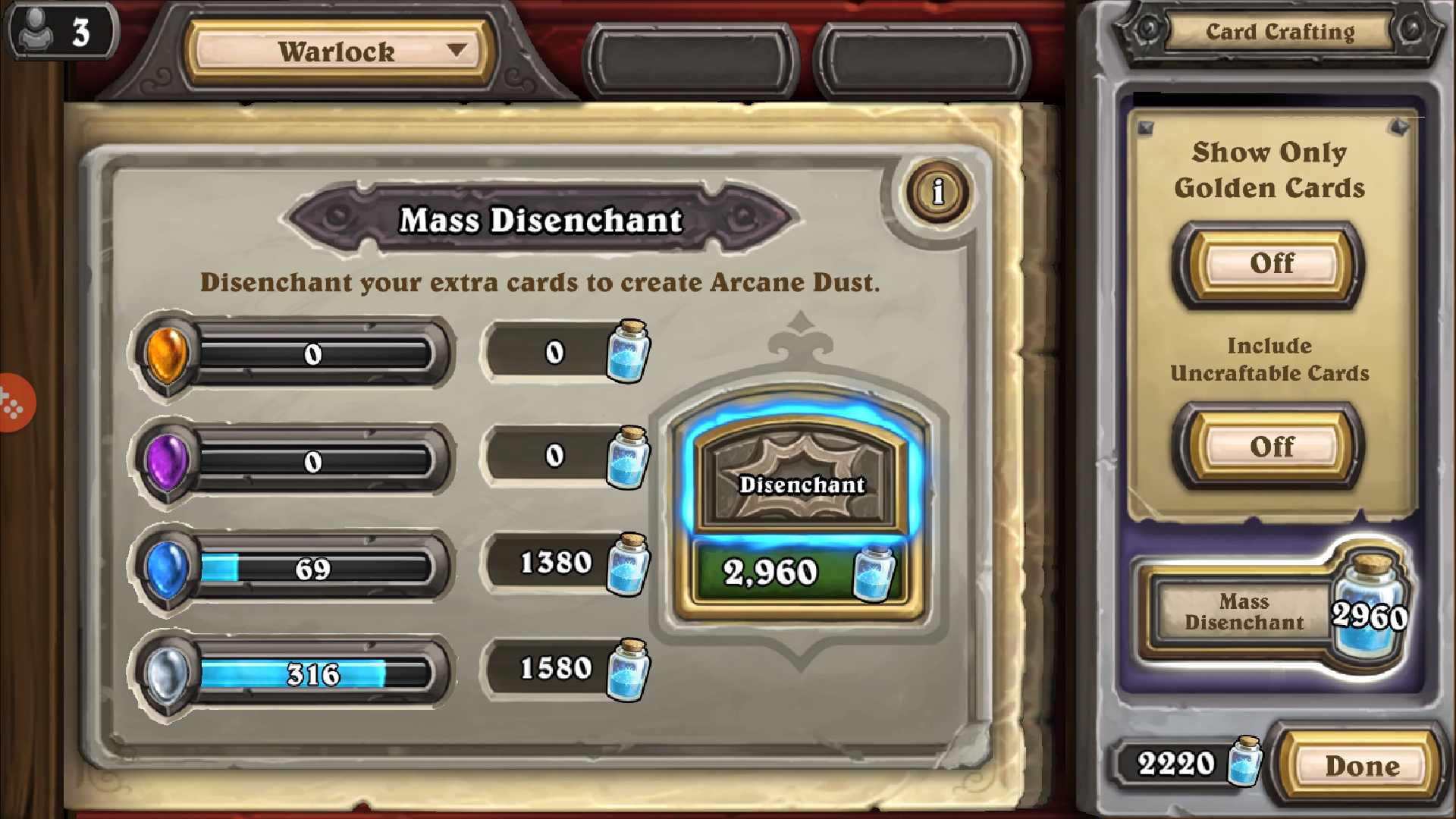 It's not obvious how to disenchant cards. If you go into "my collection" and tap on a particular card, there are buttons on the side of the display.

The top one, in red, shows the cost in dust to create the card, and the bottom, in green, tells you how much you get if you disenchant it. Press that to render one copy of the card into dust.

There's an easier way, though. At the top of the "my collection" display there's a "crafting" button. Press that and your collection will also show missing cards which you can tap on to create.

But, on the right, is a "mass disenchant" button. Using this will automatically turn all copies of anything you can't use into dust.

In practice, you'll want to use both. When you start out, and dust is in short supply, it can be worth disenchanting rarely used cards like Shieldbearer to make something more useful.

Mass disenchant treats gold copies of a card as different from the original, even though you can still only run two in a deck. So given their extra worth, new players often want to use individual disenchant to render those down too.

When your dust coffers begin to swell, you'll be itching to spending it to swell your collection. But it's difficult to know what you should be spending it on.

For starters, ignore Common and Legendary cards. Given that you get around four of the former in ever pack, you'll soon fill your collection of them.

There's no point spending dust to get one unless you've got plenty spare. Legendary cards, by contrast, are simply too expensive to be worth saving for at this stage. 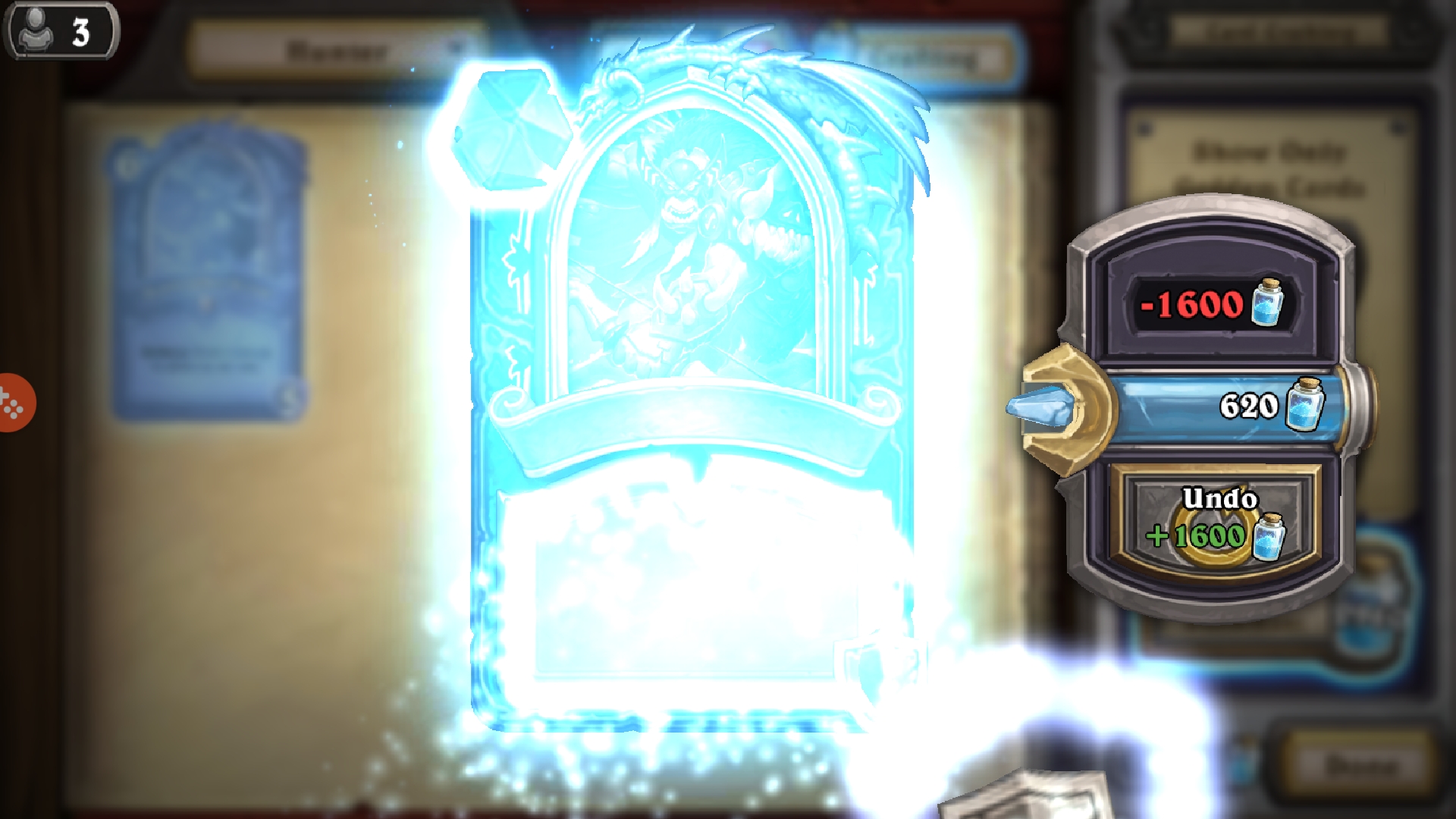 Instead, focus on Rare and Epic cards. To begin with, you'll want to craft Neutral ones, that is, cards you can run in any deck. You'll just get more use out of them than class-specific ones. Once you've filled your boots with those, you can move on to class cards.

Also at the start, try to only create cards from the Classic set. These, together with the free Basic cards, are the core of Hearthstone's card set.

Other cards, from expansions, are part of a yearly rotation that sees cards older than two years relegated to "wild" games. If you're new to the game, it's simply not worth bothering with wild.

After you've filled in the Classic cards you want, it's safe to move on to the most recent expansion. You should get two year's worth of play out of that investment, at least.

Which begs the final question of what cards you ought to be enchanting. There are several ways to answer this question, and how you go about it is up to you.

Perhaps the best way is to go with what you enjoy. By the time you've got enough dust to start creating cards, you should have enough of a feel for the game to know how you like to play.

So, pick your favourite class and your favourite archetype and scour the net for budget versions. When you find one, build the closest approximation you can, and start creating cards to fill in the blanks. 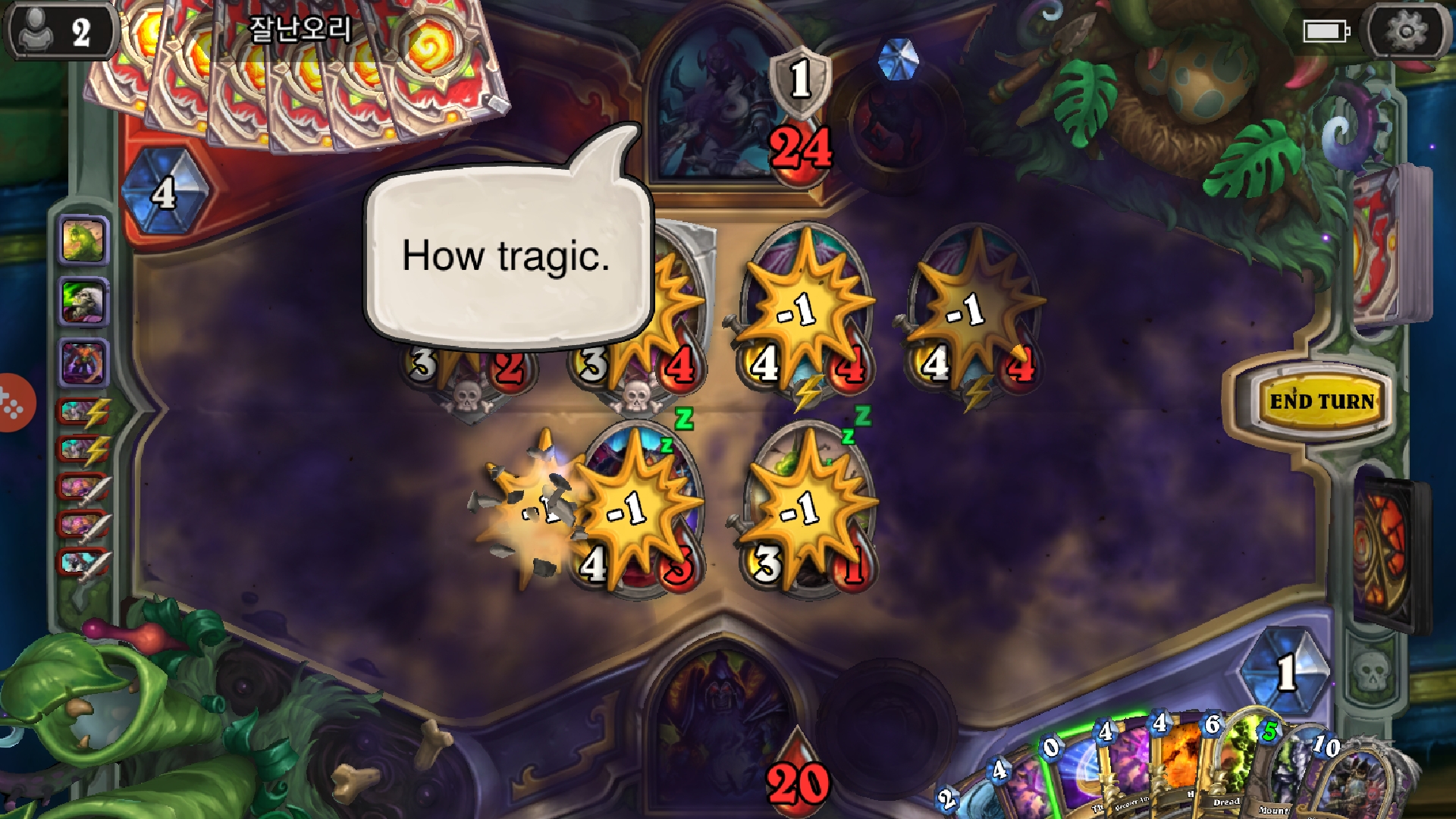 The next approach is to decide on a powerful budget deck, and start collecting the cards you need to make it. Some classes, notably Warlock and Hunter, are well know for being able to form decent aggressive decks on a very thin budget.

They won't ladder well compared to their better-tuned competitive counterparts, but they pack a punch well above their cost. Playing one of these should up your gold earning, getting you into a big leagues a bit quicker.

There are few, if any, top-tier decks you can make without Legendary cards. But if you buy the Welcome bundle you should get at least two. One with the bundle and one courtesy of a guarantee from the game that your first ten packs in any set will contain at least one.

A lot of Legendary cards aren't actually all that good. You can render these down for dust. But if you've been lucky enough to get a decent one, the final option is to build a deck around it.

Go take a look at the most popular decks in play: we keep an up to date list right here. See if any of them contain your lucky legendary. And if they do, build it as best you can, and see how far up the ladder it can take you.