Grindstone, Capybara Games’ quirky puzzle battler, has released an epic new update called “Monsters and Mamas”, letting players slash their way through hordes of beasts with new maps and a new character. Players can step into the shoes of Jorja - Jorj’s grandma - as they take on a fresh game mode and tons of daily rewards.

Available on Apple Arcade, Nintendo Switch, and PC, Grindstone’s new update features its first-ever alternate playable character as well as awesome rewards for players who breeze through their Daily Grind runs. New character Jorja has the ability to equip any unlocked gear, so you can be at your best as you take on the Boss Blitz daily challenge mode.

This exciting new challenge - unlocked at level 16 via Ivor’s Hut - lets players test their might against bosses they have already conquered before, then fight to nab the top spot in the Boss Blitz leaderboards. 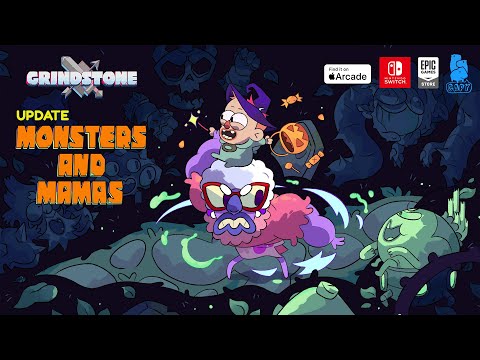 The new update also introduces a customizable High Contrast Mode, which helps players by highlighting foes based on current chain color. This mode also highlights opponents in “aggro” state, assisting players with color vision deficiency (CVD) and also those who simply wish to know how to handle their enemies best.

With over 250 levels to beat, Grindstone is a thrill for fans of both puzzles and action-packed battlers alike. If you’re eager to get a taste of the update for yourself, you can download Grindstone on the iOS App Store via Apple Arcade, which is a monthly subscription service that costs $4.99 a month. You can also have a look at the embedded teaser trailer above to get a sneak peek at the new update.

On the lookout for more puzzles on your phone? Why not take a gander at our list of the top 25 best puzzle games for iPhone and iPad (iOS)?