Genshin Impact’s v2.7 – Hidden Dreams in the Depths update went live on May 31st, introducing players to lots of new events, activities, and characters. We already saw one of them, Yelan, added to the game and now its time to take a look at the second hero in this update, Kuki Shinobu, whose character demo video has just been released by HoYoverse.

Kuki Shinobu is the Deputy Leader of the Arataki Gang and is responsible for maintaining the business and stability of the group, alongside some off-beat things like bailing the team from the police, and giving back snacks and toys to kids, hunting down slacking members, and more. While her decision to join the gang is often questioned due to their idleness, she strongly believes that her decision was correct. 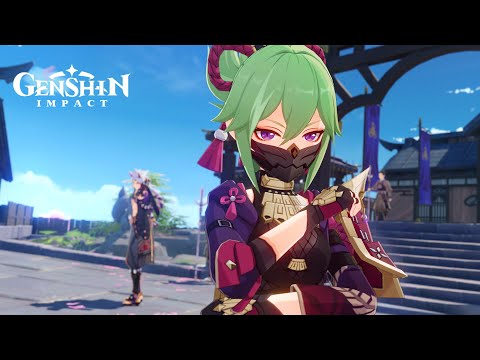 Shinobu, being the resident problem solver never fails to rise to the occasion, standing up for her team members whenever the need arises. She has been referred to as the Jack of All Trades and rightfully so because there’s nothing that Kuki can’t do. Be it looking after the gang as a second-in-command, preparing food, painting lacquerware, becoming an advocate, and so much more, she does it all.

On the technical side of things, Kuki Shinobu is an Electro Vision support character who uses her Shadowsword as her main weapon. Her normal attack can slash the enemy up to four times in quick succession. Her talents as based on her Electro abilities with one of them being able to deal Electro damage at the cost of slight health, while also healing teammates nearby, and the other does AoE Electro damage scaled according to Max HP.

Looking forward to adding the Mender of Tribulations, Kuki Shinobu to your squad? Then download Genshin Impact now for free on the App Store and Google Play.

Also, check out this month’s redeemable Genshin Impact codes for a chance to earn Primogems, Mora, and more.
Next Up :
Block Break - Extreme Edition lets you break blocks across a hundred levels at increasing speeds, out now on Android