Everything a newbie vault dweller needs to know 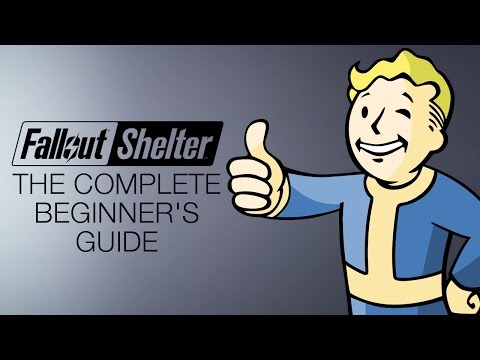 Bethesda announced at E3 that Fallout 4 would be coming to consoles and PCs in November. Though that may be some way out, in the meantime iOS (and soon, Android) gamers have Fallout Shelter to keep them busy.

I've been ploughing a bunch of time into building up my vault already, so I thought I'd share with you my top tips for squeezing the most out of the game and ensuring your dwellers live happy, healthy, prosperous little lives, after the apocalypse.

Resources are incredibly important for the overall well-being of your Dwellers, and early in the game you'll want to focus on ensuring you have a good amount of resources constantly coming in.

The three key resources are Energy, Water, and Food. Energy keeps the lights in your vault on, and without it your rooms will produce resources inefficiently. Water and Food keep your Dwellers fighting fit, so if you don't have any Food in your stores, for example, your people will begin to lose health from starvation.

Straight out of the gate you'll want to build at least one of every resource-producing room, and as you get further you'll want to always ensure you're not producing too much of one resource at the expense of others.

You must have Dwellers in a room to produce resources from it, but if you add more staff you'll produce the resource much faster, and larger rooms (constructed by placing two or more similar rooms together) allow for more people.

One other technique you can try is to Rush production, but failing a Rush usually ends up with the room exploding or being infested or some other horrible thing, so you'll need to be confident the Rush is worth it.

Popping on your explorer's hat

An aspect of Fallout Shelter that's easily overlooked in the opening hours is exploration. Exploring the wasteland is incredibly beneficial for your vault and its inhabitants, as doing so not only increases their XP, but you also have the chance to scavenge Caps in the process. You should always have a team looking for goodies, as the benefits far outweigh the risks.

To get exploring, drag the Dweller you want to send out to an area outside the vault. You have the option of equipping them with outfits and weapons before they set off, so if you do have a Rusty Rifle or what-have-you lying about, make sure to thrust it into their hands to increase their chances of surviving against the horrors that lie in wait.

Once you've set them on their merry way, you can tap the button in the top left of the screen to keep an eye on them and their adventures. Not only does this add to the sense of what the world has become through flavour text, but you can also pull explorers back once you think they've found enough loot.

Just remember that you do need to recall them to score that sweet cheddar, and that returning to the Vault takes time.

Getting more Caps and Lunchboxes

You'll quickly find in Fallout Shelter that you need more and more Caps to start further constructions or begin more upgrades for existing buildings. While you'll get plenty from exploring the wasteland, you should strongly consider taking advantage of other channels to maximise your profits.

The main of these is found in completing objectives. You can access these through the Pip-Boy menu, and finishing each objective will reward you with trinkets, often in the form of Caps, and sometimes in the form of Lunchboxes.

You often don't need to do a lot to finish them, especially early on in the game.

A big injection of Caps can help you get ahead quickly, but the Lunchboxes will not only likely contain a bit of cash, but new Weapons and Outfits too, and these will allow your Dwellers to head out into the wastelands for longer which, as you might expect, ensures they bring home even more Caps.

And that little wedge of info should get you on the right path early on in Fallout Shelter. Got a tip of your own? Share it with us in the comments below.