DUNKYPUNG, from developer Nathan Meunier, is a lesson in humility for those of us who think we're good because we bumbled our way through Celeste and like to complain publicly about Super Mario Odyssey being too easy. It's a game about avoiding pointy objects of all shapes and sizes, and it's also really rather good.

The first stage straightaway had me on edge. Hitting the top of the screen sent me rocketing downwards towards a spinning saw that just happened to be passing by. Below lay a row of spikes, primed and ready to kill. Every so often some fresh hell would pop up to utterly obliterate my dinky avatar.

Clearly, for me, the stages started out none too inviting, and things only got more stressful from there. Soon I was dealing with retractable spears, glowing switches, and deadly fireballs – again, very stressful.

Generally speaking, you're given ample time to react to any emerging obstacles, with an obvious red warning lighting up the stage whenever something awful is about to make its grand appearance. Inevitably it's sometimes all just a bit too much to take in, and those with slow reaction times will find themselves severely disheartened. 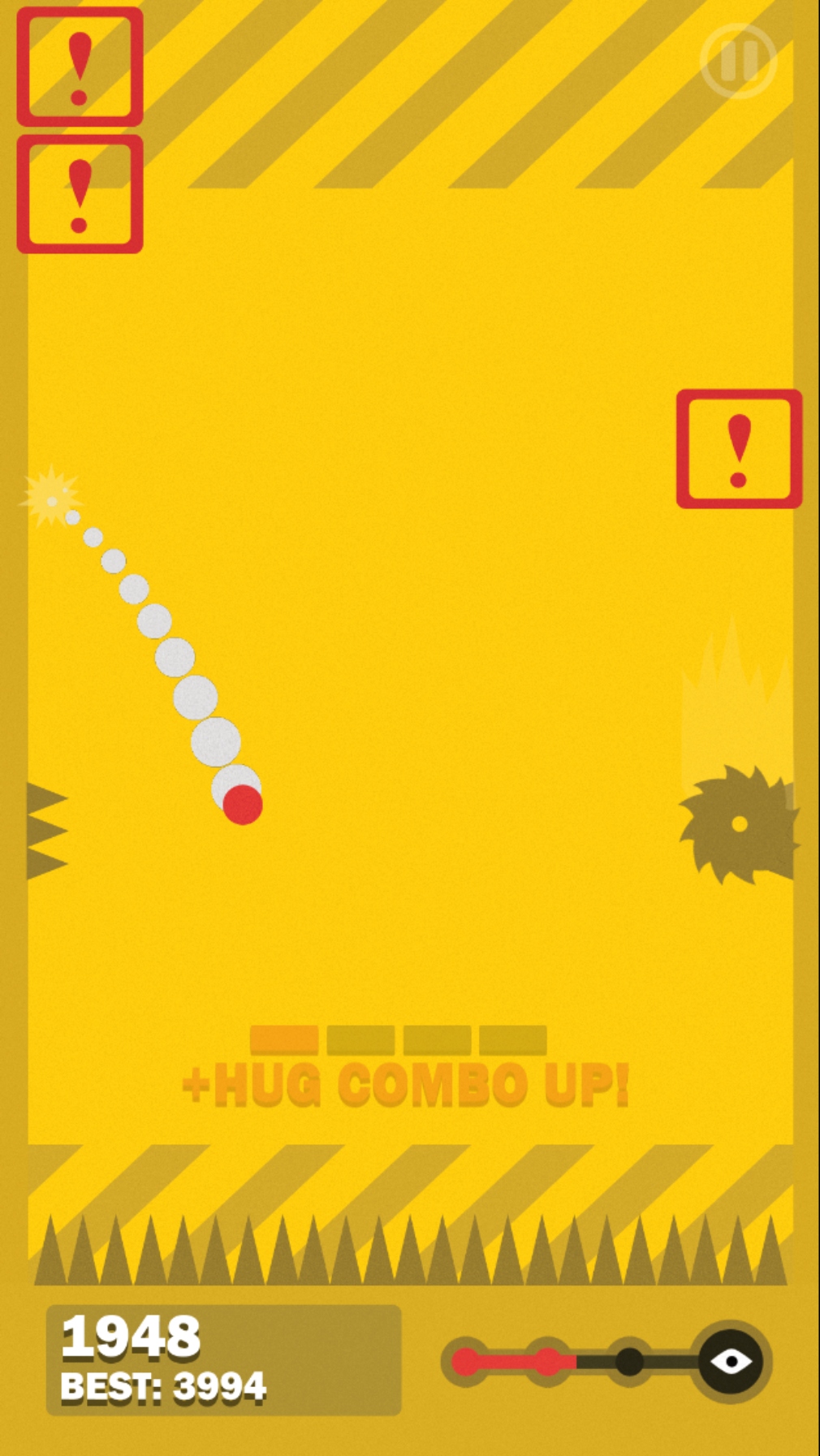 Controlling the little avatar couldn't be easier, with each tap resulting in a slight burst of upwards momentum (think Flappy Bird), and I was rarely let down by unresponsive movement or unreliable physics. Saying that everything functions as it should might not be grounds for high praise, but it's especially important with games like this that there's minimal fussing or faffing about during play.

Your score can be boosted in a number of different ways such as collecting white orbs or through a risk/reward mechanic called Death Hugs – basically a bonus for narrowly avoiding any death-dealing traps on screen.

See what we thought of Looney Tunes: World of Mayhem here

Once I'd learned how they worked, and what I could and couldn't get away with, intentionally brushing past pointy objects became one of DUNKYPUNG's biggest hooks. Of course, you could just wait it out and avoid throwing yourself into danger, but where's the fun in that?

Opting to complete specific challenges, such as reaching 10,000 points on a level, will eventually get you some neat little unlocks for your "Pung". From what I saw of them, they amount to fun and quirky additions rather than genuine game-changers, though the important thing is that they're enjoyable and refreshing to use. I won't spoil them here, as part of the fun is seeing what silly nonsense will present itself next. 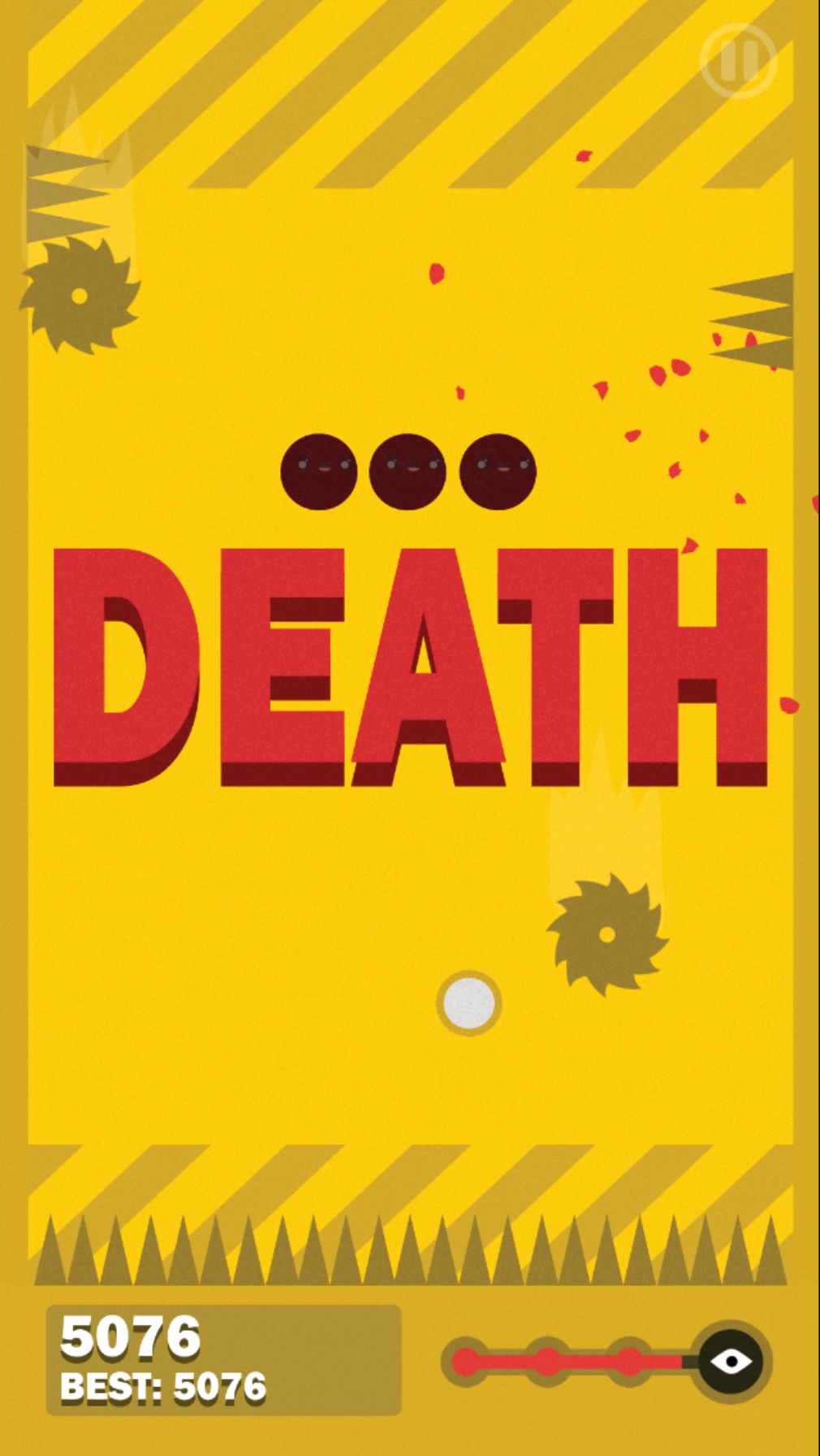 An announcer, who regularly speaks in hushed tones, introduces and closes out every match with a word or two. Due to the homemade quality of the audio and voice work, I have to assume that it's the developer himself. Regardless, it adds a great deal to the game's strange charm.

The visuals are clean and minimalistic in their execution, with striking yellows helping to accentuate the off-kilter industrial aesthetic. Perhaps the later levels could benefit from being more visually distinct, but the imposing bosses that bookend every stage manage to somewhat make up for this.

Why am I so pants?

After beating the first boss and getting to grips with the Death Hugs mechanic, my efforts finally felt vindicated. Sadly that sense of comfort and accomplishment didn't last for long, as the later levels ramped things up to an almost comical degree.

It cannot be overstated just how difficult, frustrating, and patience-testing some portions of DUNKYPUNG can be. If you believe yourself to be a dab hand at this sort of game, think again. Thankfully, more often than not, the unrelenting challenge spurred me on to have another go; however, that certainly won't be the case for everyone.

And even with the casual mode turned on, which gives you a few extra lives to use before starting over, you'll still require a penchant for pain and unwavering perseverance to get anywhere close to those final few bosses. Honestly, I don't know if I'll ever physically be able to finish DUNKYPUNG. But, for sure, that won’t stop me trying.

DUNKYPUNG offers a thorough – and exceedingly challenging – exploration of a simple premise, with an oddball aesthetic and hugely replayable levels to boot
Next Up :
REDMAGIC 7S Pro Supernova Lords Mobile Edition review - "A true powerhouse dedicated for mobile gamers"

Giant Monster War, a real-time strategy game where you conquer the world, is out now on Android and iOS