Dragonheir: Silent Gods - Here's why you should be excited for this upcoming dice-rolling RPG

Arkendia lies in ruins. You wake up confused and your powers weakened, with monsters and beasts threatening to purge the world in darkness. Will you take up arms, accept your mission as the Chosen One, and save the world?

Dragonheir: Silent Gods is an upcoming fantasy RPG with strategic elements coming to PC and mobile in 2023, and here are just some of the reasons why you should look forward to its release.

From Dwarven Fighter Gimgus to Dragonborn Sorceress Hvitar, players can encounter a wide variety of memorable heroes on their quest to retrieve their lost memory. They'll have to recruit characters into their lineup to battle against the evil Dragon Queen Tiamat, with Iskalland Darves, Death Knights, Orcs, Plain Humans, Dark Elves and more fighting by their side along the way.

The game also features vast lands players can explore across gorgeous plains, the ice fields of Iskalland, lush forests, the mysterious underworld and more. All these feature dynamic real-time lighting that boosts player experience when it comes to weather conditions enhanced by PBR textures. 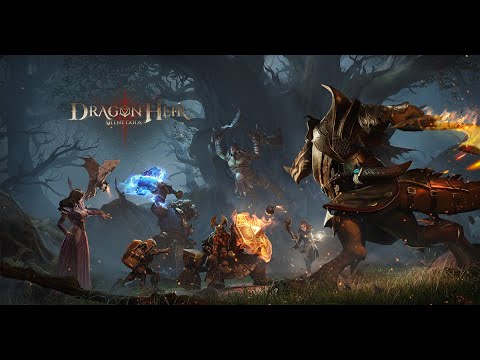 Combat is an exhilarating dice-based affair where each roll of your 20-sided (D20) dice will determine how your roster of heroes will act. With over 200 heroes to collect and a million hero builds, you can strategise the best combination and formation during combat to unleash devastating skills and bring down your foes.

The semi-real-time battle system also features a chess-style battlefield as your characters explore dungeons, solve puzzles, hunt for treasure, and engage in combat across non-linear missions and unpredictable side quests.

A hand-crafted journey of your own making

Rolling the dice will determine how each player's narrative will go, with AI NPCs and characters that can spice up the gameplay based on their unique storylines. You can interact with other like-minded individuals and go on your own quests with them without any preset rules as well.

To top it all off, the game boasts exciting seasonal updates that will constantly mix things up for players, adding new stories, special bosses, fresh dungeon content and awesome in-game goodies for players on a regular basis.

If you're keen on learning more about the dice-rolling fantasy RPG, you can join the community of fans on the game's official Discord server and Facebook page for more info. Dragonheir: Silent Gods will be running a few tests throughout the year, and will aim for an official global release in the first half of 2023.

What's A Preferred Partner Feature?
From time to time Steel Media offers companies and organisations the opportunity to partner with us on specially commissioned articles on subjects we think are of interest to our readers. For more information about how we work with commercial partners, please read our Sponsorship Editorial Independence Policy.
If you're interested in becoming a Preferred Partner please click here.
Next Up :
App Army Assemble: Typoman Remastered - "What's the word on this remaster?"

Dragonheir: Silent Gods is an upcoming RPG where you roll the dice to make your own story