In this Darkfire Heroes tier list, we’ll look through the different types of characters and tell you what to expect when building a team. Once you get into the swing of managing your team in Darkfire Heroes, you’re going to want to quickly find out who are the best characters in the game.

Having a well-balanced team filled with the best heroes is essential to taking on harder levels in the game, and while each team has its merits, ensuring you have the right hero for the job is ultimately the goal. With different roles and elements to worry about, the strongest hero isn’t always the best in some cases, and knowing the strengths and weaknesses of each can be the difference between success and failure.

To begin, there are three different grades of heroes: common, rare, and epic. While common characters aren’t the most diverse, they are easier to upgrade because you will earn them more often.

Rarer heroes will provide extra abilities and strength, but are harder to find and will take longer to level up. Epic heroes are the best of the bunch, but with such a low drop rate, you’ll be hard-pressed to upgrade them.

The recommendation is to focus primarily on common and rare heroes, at least if you’re not wanting to spend any money. These two grades will see significantly higher drops than epic heroes, and while they won’t provide you with the most diverse or strongest hero types out there, you’ll likely gain more mileage this way. So, without further delay, let dive into the Darkfire Heroes tier list! 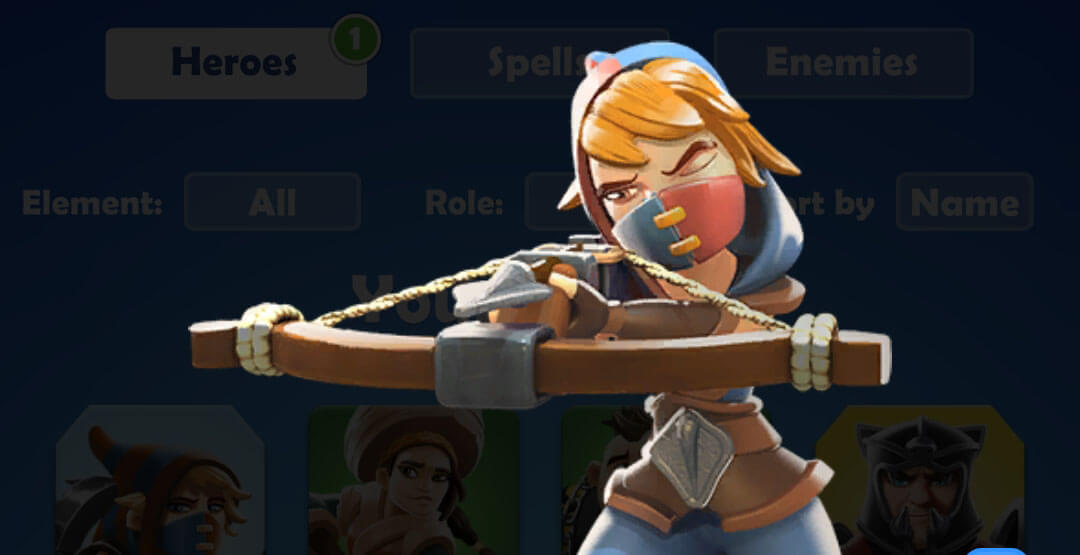 Her ‘Break Defences’ ability will not only damage enemies but also increases the entire team’s damage to enemies for a short duration. Perfect for bringing the pain.

With a massively useful kit, Klexandr will be a great addition to any team. He not only buffs the allies but also has a chance to stun his opponents.

Vany has some of the best heals in the game, while also granting immunity to debuffs for a short period of time.

Easily the best tank you can put on your team. With high HP and armor stats, he can also reduce enemy damage by 50%. If you use him as your solo tank, he gets a large buff to his defensive stats.

Her Fire Stream will do a high amount of damage to anything caught in its radius. Not only that, but it can crit with fire damage.

Using Aleon’s Cause Fear ability to scare enemies is an amazingly powerful tactic. The Frightened state causes those afflicted enemies to move randomly and also lose their ability to attack.

She can whip enemies towards her, which does damage, and pulls the enemies to melee range. It also stuns them, which can be a perfect setup for a ranged attack.

A strong healer, Kataryn uses her Vampirism buff to deal damage and heal heroes at the same time. It’s got a long duration and provides 100% of the health back that is dealt to enemies.

Hands down, the best sniper out there. Her Sniper Shot ability does great long-range damage and even offers critical hits.

Not only a great healer for single targets but with her Field Medic skill, she can potentially heal the entire party of heroes as she attacks.

Although she's very squishy, she deals insane damage especially thanks to her increased Critical Chance. 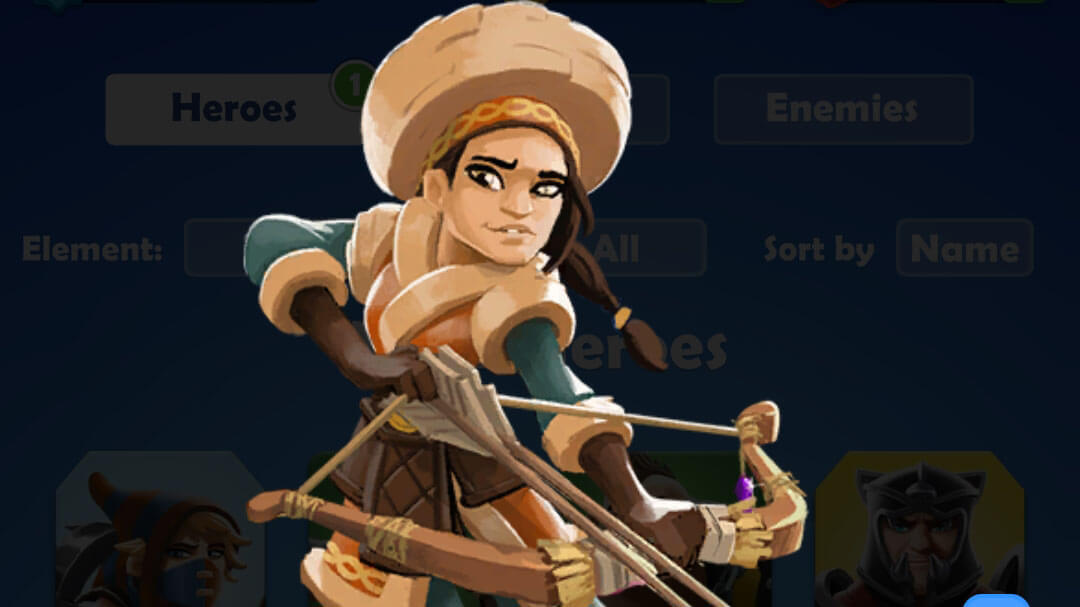 Don’t let her type fool you, Lyang can help you dish out some serious damage with her ability to use Protect, which makes your heroes invincible for some time. She can be used forward to help out your other tank or left as the primary one.

A great hero that teleport using Vortex and can pull enemies towards him. A very good kit for a very solid A-tier tank.

Pryya can attack enemies and inflict Stun for some time. The best part is, she can also deal quite a bit of damage which lands her alongside the other hero released with her, Ansh.

While Otho is a starting character and really does not have a lot of health to qualify him as a proper tank, but he can sure pack a wallop. His Ground Pound makes quick work of smaller hordes.

Methus is able to call forth lightning, dealing massive single target damage to an enemy and dazing them. This skill will also heal Methus back some of his missing HP.

Zasha will shoot a bolt at the enemy, stunning its target and damaging enemies caught in its path.

She can attack a single target and deal a lot of damage.

A decent auto-attacker with a large amount of area damage. Her damage increases significantly at higher levels. 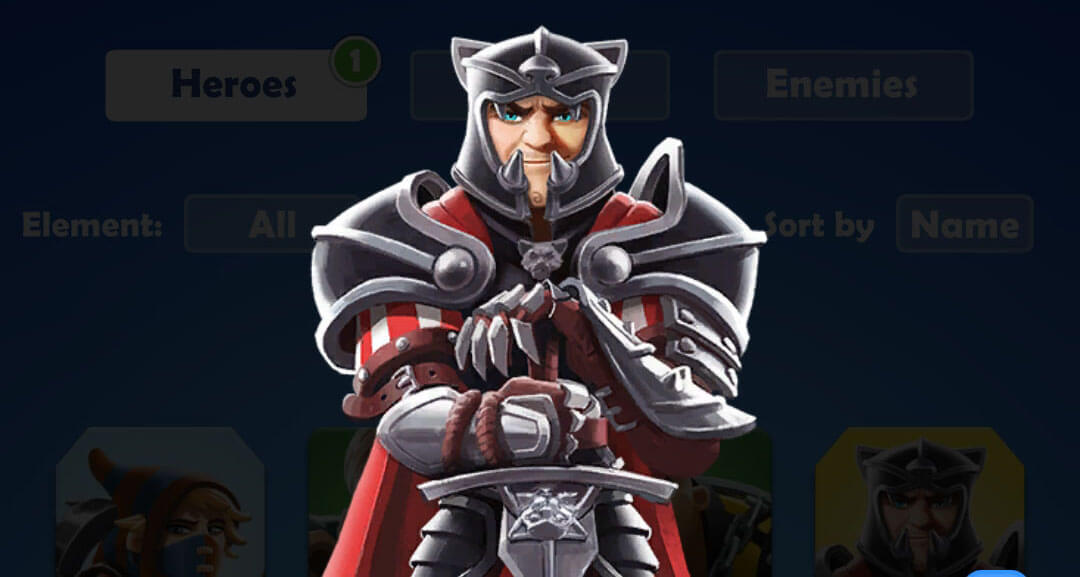 Dyane is a good all-around damage dealer with a decent melee attack and HP.

This tank can also use healing, making him a decent option when you’re looking to round out your team. Can also stun enemies, making for easier crowd control and set up for AoE attacks.

His sticky shot attack can slow down enemies and do some high damage, but slowing down enemies becomes less of a requirement in later levels.

Larenzo launches a chaining ability that will hit additional damage to 3 other targets.

She has a chance to daze enemies.

Makash is a great unit if you want someone that inflicts damage over time. He can poison enemies, which is a constant source of damage.

Somewhat of a one-trick pony, Marthe’s ability to heal is her strongest ability and not much else. She can single-target heal better than anyone, but without much variety, it’s hard to regard her as anything other than middling.

Like Dyane, she can offer a well-rounded approach to most combat situations. Her Rapier Throw power does a neat line of damage attack both forward and as it returns to her.

With exceptional health and armor, Raebert can heal the team and dish out damage, making him well-rounded. His automatic shield can be useful to protect him when his health drops below 10%.

Raem can charge forward, dealing damage to enemies in the way and knocking them back.

She can target a small area to daze enemies and knock them back a short distance.

Jargen is a summoner - he will open up a portal that'll spawn skeletons which will continue to fight in his place.

Elsi has a good crit strike and crit damage, and she can also trigger a free spinning AoE attack around herself once she kills an enemy.

She has high burst single target damage which can also apply Frozen status to her enemy, which is a great CC to have.

Does well with many skills that can assist with him auto-attacking and dishing out critical attacks. His area attack can also provide critical attacks to all enemies in a wider area.

A healer that can provide healing for the team and focuses on offering health to the hero with the lowest HP. He can also increase damage as he heals.

Offers major damage to single targets with his Backstab power.

Zao will launch a dragon that deals damage to enemies on its way and explodes once it reaches the backline.

Raol’s poison attack Toxic Bottle is quite useful against large groups of enemies and is easily one of the greatest AoE damage dealers.

Asachi is the first hero that you'll unlock, but she won't be there to stay - trust me.

Can stun targets and do a fair amount of damage, due to his speed.

While Bezar has a pretty good range, it's not really the best supporter you could find.

She has a chance to inflict Vulnerable effect on enemies with her auto attacks.

Is able to push away enemies with his Tornado power and can work well with other Air heroes to do additional damage.

Healing pool can give the team an area of healing on the battlefield, but Emani is both low health and armor, which can leave him defenceless.

Her Healing Wind can create a healing area for the party, but at the cost of it only working in a specific area. She can also slow down attackers and retreat to heal.

With Blade Storm, Linx can string magic attacks together, which will help her attack multiple enemies at once. Provides a significant advantage when using auto-attack.

Her primary power pushes enemies away and her magical attack Life Drain can damage enemies and restore 100% of health to Ylga that she deals unto foes.

Zan will deal pretty good damage and stun enemies in a medium size area for 2.5 seconds.

She will cast a bomb over a long distance, but will take some time to charge up and explode.

Bjor has a pretty good knockback to his kit, but that's about it. His damage is lackluster (for a damage dealer) to say the least.

His freezing howl freezes enemies and does physical damage. He also has a healthy defense against magical attacks.

His Triple Spears can both knock back enemies and attack single targets multiple times. Good for quick, high damage attacks.

He can charge forward a long distance, and can knock other enemies out of his way. Pretty useful at times...

Eremy can summon a leech which attacks enemies.

Tomoni will summon 2 Ancestral Spirits that will fight in his place.

Tonio's Crit Chance will increase for each Damage Dealer type of hero in the party, and also gain extra max HP.

Eseppe can cast Cursed Net on opponents, trapping them and causing them to take more damage, but dealing no damage himself.

Hagin can chill enemies with his attacks.

It's quite difficult to pull off a successful skill cast, because his explosion takes time to charge up.

Herlin can weaken his opponents, making them more vulnerable.

Ivon has a chance to stun his opponents.

Jendrik will spawn a plant to fight in his place.

Varger will lunge at the enemies in front dealing AoE damage.

Varnar will deal physical AoE damage in a straight line, knocking back the targets he hits and dazing them.

While this isn’t a complete Darkfire Heroes tier list of all the characters available, it should give you a rough idea of who to seek out for your team. As events take place, certain heroes will rotate in and out, so be sure to keep an eye out for those opportunities to snag the perfect hero for your party. There’s plenty that can change between now and the official release later in April, so be sure to follow our coverage as news comes in!

Darkfire Heroes tips and cheats for improving your party