LINE Games has revealed a few new titles it will be released throughout 2021 and 2022 in a new keynote at LPG 2021 held in South Korea.

Among the new titles revealed, LINE Games announced that a sequel to Crystal Hearts will be coming to mobile devices in 2022.

Crystal Hearts 2: Compass of Dimension will be set two decades after the original game, and succeeds the series’ soft coloured fairy tale art style, enhanced with modern high-end 3D graphics. It will be set in the world of Arkan and features exciting adventures and rich strategic content for you to dive into.

For the unaware, Crystal Hearts was a mobile RPG set in a fantasy world where you play as a group of adventurers headed by Emil, a young warrior, and your party must set out to protect several mysterious crystals. 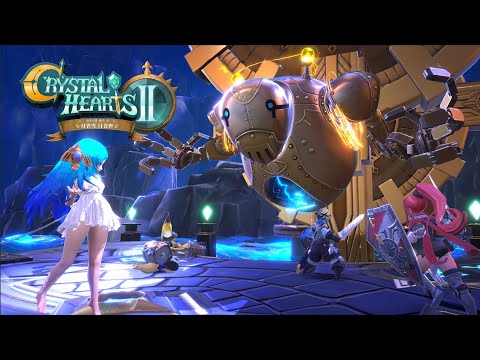 The combat was in real-time, where your character would automatically attack the nearest enemy unless you assigned them a specific action. This ensured that your party was always busy doing something and not idling during intense moments.

It looks like the sequel will also be adopting a style like that. You can see more of the game in action by watching the trailer we've linked above. As you can see, the gameplay is pretty fast-paced and looks really smooth in terms of performance to ensure a great experience on modern phones.

The keynote also revealed some other titles LINE Games would be releasing for other platforms, including The Vanshee, Project Household, Quantum Knights, and Undecember, which is said to have mobile and PC cross-platform.

Crystal Hearts 2: Compass of Dimension will release for mobile platforms sometime in 2022.

If you are interested in playing mobile role-playing games, then you may want to read this list we've put together naming some of the best to find on Google Play.
Next Up :
Honkai Impact 3rd is launching version 6.2 The Chrono and the Hare soon