Concordia: Digital Edition is coming to mobile and PC tomorrow with an expected switch release later this year

Concordia: Digital Edition is an online adaptation of the popular strategic board game Concordia. Just like Marmalade Game Studio brought the official Monopoly board game to the virtual realm, Acram Digital is doing the same with Concordia.

If you don't know what Concordia is, it's a board game that two to five people can play and it's fairly complex. In Concordia, each player starts as the owner of a Roman trading house, hoping to extend their reach across the empire. To do so, you will need to make contracts with influential personalities, build markets, trade goods, and so on. But unlike Monopoly, it's not wealth that will determine which trading empire is the greatest. Instead, it will be your devotion and sacrifice to the various Roman gods. The game ends when a player has built their 15th house or has purchased the last two personality cards.

Unlike the board game, in Concordia: Digital Edition, the game features lots of additional maps and expansions, meaning the replayability is near infinite. Players can also play against AI or challenge their friends from anywhere in the world. The game even supports cross-platform play. 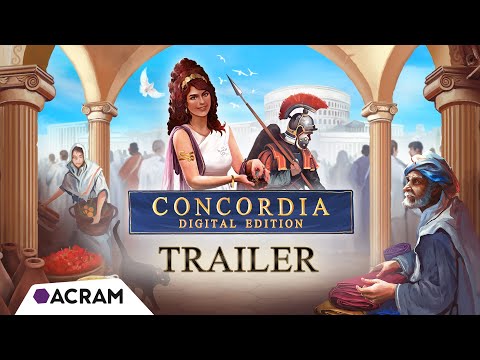 Concordia: Digital Edition to release on Mobile and PC tomorrow

The game developer has confirmed that Concordia: Digital Edition will release on Android, iOS, and PC tomorrow, September 28th. After the launch, players will be able to download the game from Google Play, App Store, and Steam. The game is priced at $9.99. A Nintendo Switch version of Concordia: Digital Edition is also planned to be released later this year. Interested in more board games? Check out our list of the Top 25 best digital board games for Android phones and tablets
Next Up :
Alien Food Invasion is a unique action game where you take out aliens and then serve them as food