Netmarble has just announced a cosy new update for its match-3 puzzle game, Charlotte’s Table as we gear up for the holidays. It has been titled Our Holiday Party and introduces a number of events, quests, and a limited seasonal stage featuring new meals too.

All the festivities have already kicked off and players can expect celebratory events where they can earn points by completing puzzles. This will give everyone a shot at earning a special picture that can be added to the photo album. Charlotte’s Table is also adding holiday-themed foods such as Turkey, Bûche de Noël, Mashed Potato, Salad and Brussel Sprouts to keep the spirit alive.

In addition to this, a new holiday season pass is also being introduced, which will offer players a treasure trove of rewards and seasonal costumes. More goodies can be obtained by clearing all the special events that are a part of this holiday update. 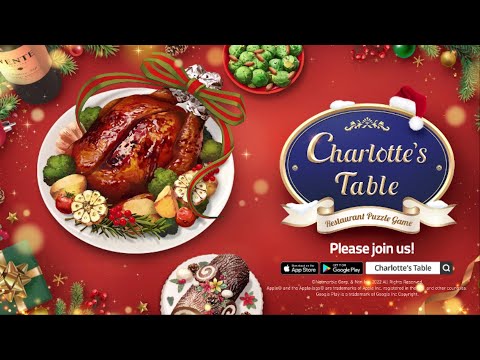 Macaron Obstacle tasks players with the job of gathering macarons by matching tiles that have the same colour as the macarons. Power-ups will do the job as well. Charlotte will also be seen carrying on with her journey in Episode 13 – Housewarming Party, where she takes over an ocean-view restaurant, allowing players to pick all the decorations.

The update also adds 50 new puzzles, taking the tally up to 550 now. The menu too features the welcome addition of Beef Wellington. Team competitions come to the match-3 as well. 20 teams will go off against each other with each individual team containing anything between 10 and 50 players. Finishing collaboration levels will add to the team’s score and the group with the highest tally will take home the grand prize.

Get ready for the holiday season by downloading Charlotte’s Table now for free using either of the links below.

Also, check out this list of the best match-3 games to play on mobile!
Download now!
Charlotte's Table

Next Up :
Call of Duty Mobile is wrapping up 2022 with Season 11: Ultimate Frontier launching next week

Charlotte's Table, a match-3 puzzler where players run their own restaurant, is out now on mobile