The smash-hit mobile strategy RPG Brown Dust, otherwise known as Brave Nine globally, is going to receive three new games under its name this year. Developer Neowiz announced today that its next three releases will be within the same IP after the massive success Brave Nine turned out to be.

First up is one named Brown Dust Story, likely to be name changed if it releases globally. This one is a pretty large departure from Brave Nine's gameplay, as it is a visual novel RPG. Players will navigate and complete a storybook while also engaging in turn-based combat that involves the typical things associated with the genre, such as gearing up, leveling, and composing a party worthy enough to take on the challenges presented. Exact story details are pretty light, but the release can be expected to hit Southeast Asian markets this Summer.

Next, we’ve got Brown Dust & Puzzle. Now this name sounds pretty self explanatory, but the way it has been described is something akin to the puzzle RPG genre that is pretty popular in Japan. Using a match-3 system, players will compete in guild raids, guilds battles, and league battles alongside raids and dungeons. To some this may sound odd, but titles like Puzzles and Dragons have become a large success, alongside games like Crash Fever or World Flipper, all in that same genre clash. 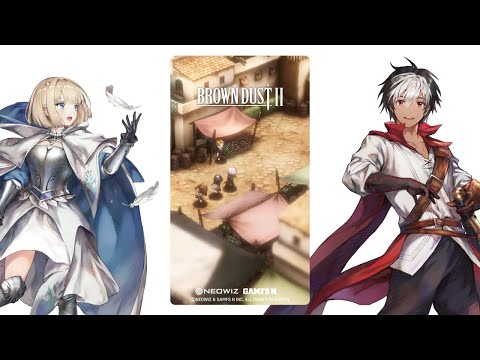 And finally, the big one. Brown Dust 2 is, of course, a fully-fledged sequel to Brown Dust/Brave Nine. Details for this one are incredibly light aside from the short clips above. It looks to be sporting that 2.5D art style that a lot of modern JRPGs have taken to, and it’s safe to assume it will include all of the systems from its predecessor, just amplified and better. No release dates for this one or Brown Dust & Puzzle, but more information is expected soon.

Brave Nine is, of course, a strategic RPG that encourages teamwork and getting involved in guilds alongside team building and tactical decision making gameplay. If it sounds up your alley and you want to brush up on the setting before these three spin offs and sequels drop, you can find it for free on the App Store and Google Play.

Are you a fan of puzzle games? Take a gander at our Top 25 best puzzle games for Android devices!
Next Up :
Shiren The Wanderer: Tower of Fortune, sequel to the classic roguelike, releases on mobile in Japan