Bait! is such a tranquil fishing game that I kind of wish it pushed its slight sci-fi bent a little further. The stylized locations are too serene, to the point where they’re almost uncomfortable. Nothing is perfect, right? 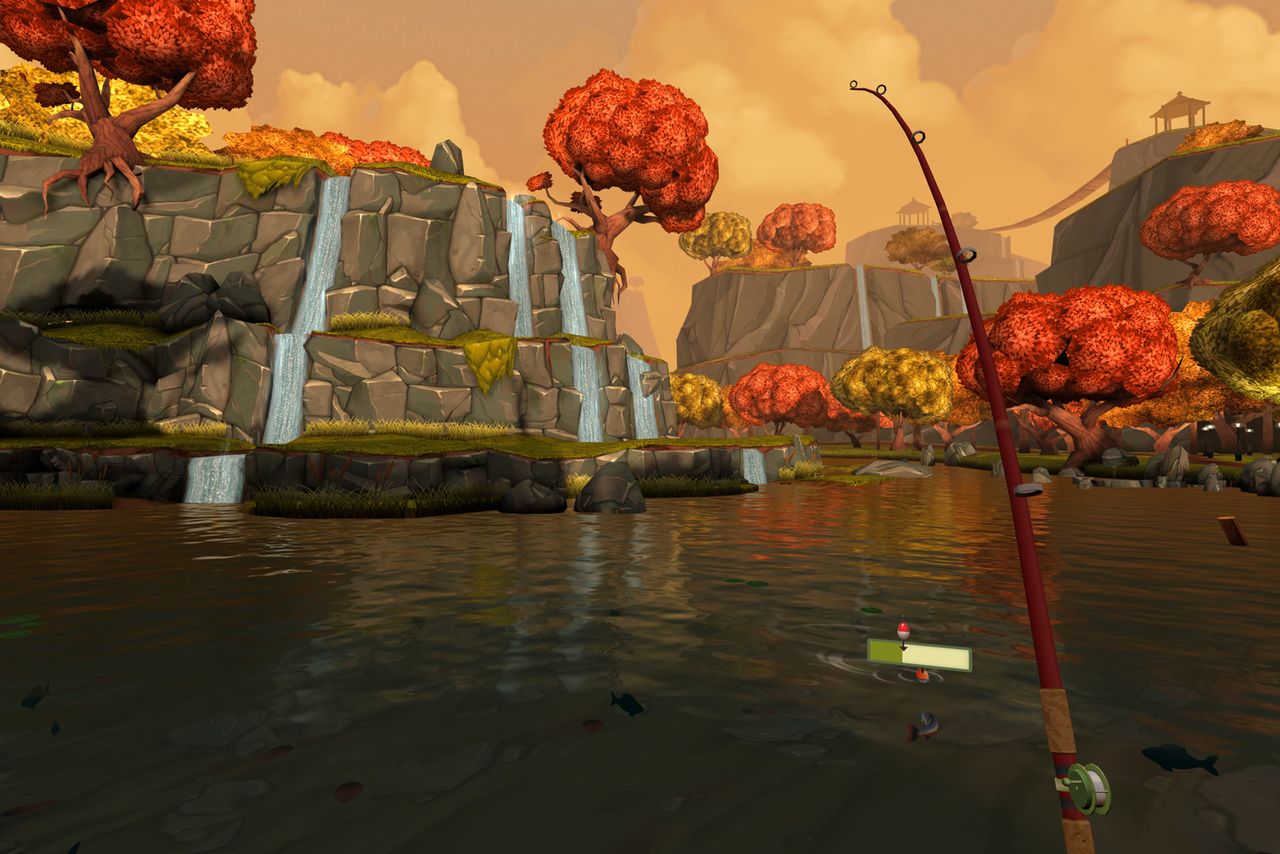 But picturesque lakes is exactly what you’ll find in the appropriately named Bait Island. You have to catch a rare prehistoric fish for an aquarium that’s in danger of going bankrupt. Having a new specimen to display might just be enough to save it.

I’ve been largely underwhelmed by the Gear VR’s library, and while Bait! doesn’t change that, it at least shows that some developers are actually serious about making VR games and not gimmicky tech demos.

One of the most delightful things about Bait! is the menu. It’s part of a futuristic device called the Fish-O-Matic. When activated, the Fish-O-Matic projects the menu as a hologram in front of your face, and from there you can make phone calls to other characters, equip different fishing rods, travel to different points on your map, or peruse your fish database.

The fish themselves are fun to look at. They’re all made-up creatures with silly names like the Pinstripe Perch (it looks like it’s wearing a suit), the Chili Anchovy (an aquatic chili pepper), and my favorite, the Pigskin Pufferfish (an American football with fins). 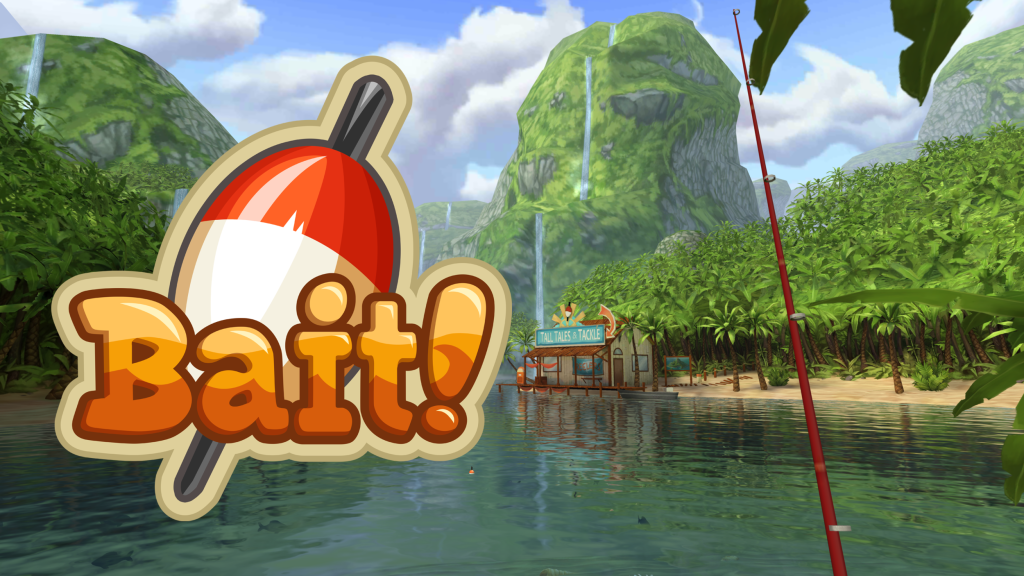 While they’re not as charming or useful as Pokémon, I still wanted to collect as many of them as I could throughout the course of the story.

Catching fish is pretty simple. You use your eyes to aim your throw, and then cast your fishing line with one tap on the touchpad. When a fish takes your bait, you hold down your finger to reel it in. However, if you press the touchpad for too long (as represented by a color-coded meter), you risk breaking your line.

If the meter starts turning red, you need to let go for a few seconds until it’s back to green, and then press down again. You repeat this process until the fish is in your hands.

After a few tussles, it becomes a little boring. The bigger, rarer fish don’t put up much of a challenge, either. It just takes more time to bring them in.

Not much incentive to keep going

You can continue to fish as much as you like once the story ends (it took me about an hour to finish it). Bait! has 43 fish in all, and each of them has an additional 3-star variant that you can catch. The heavier a fish is, the better their star rating. 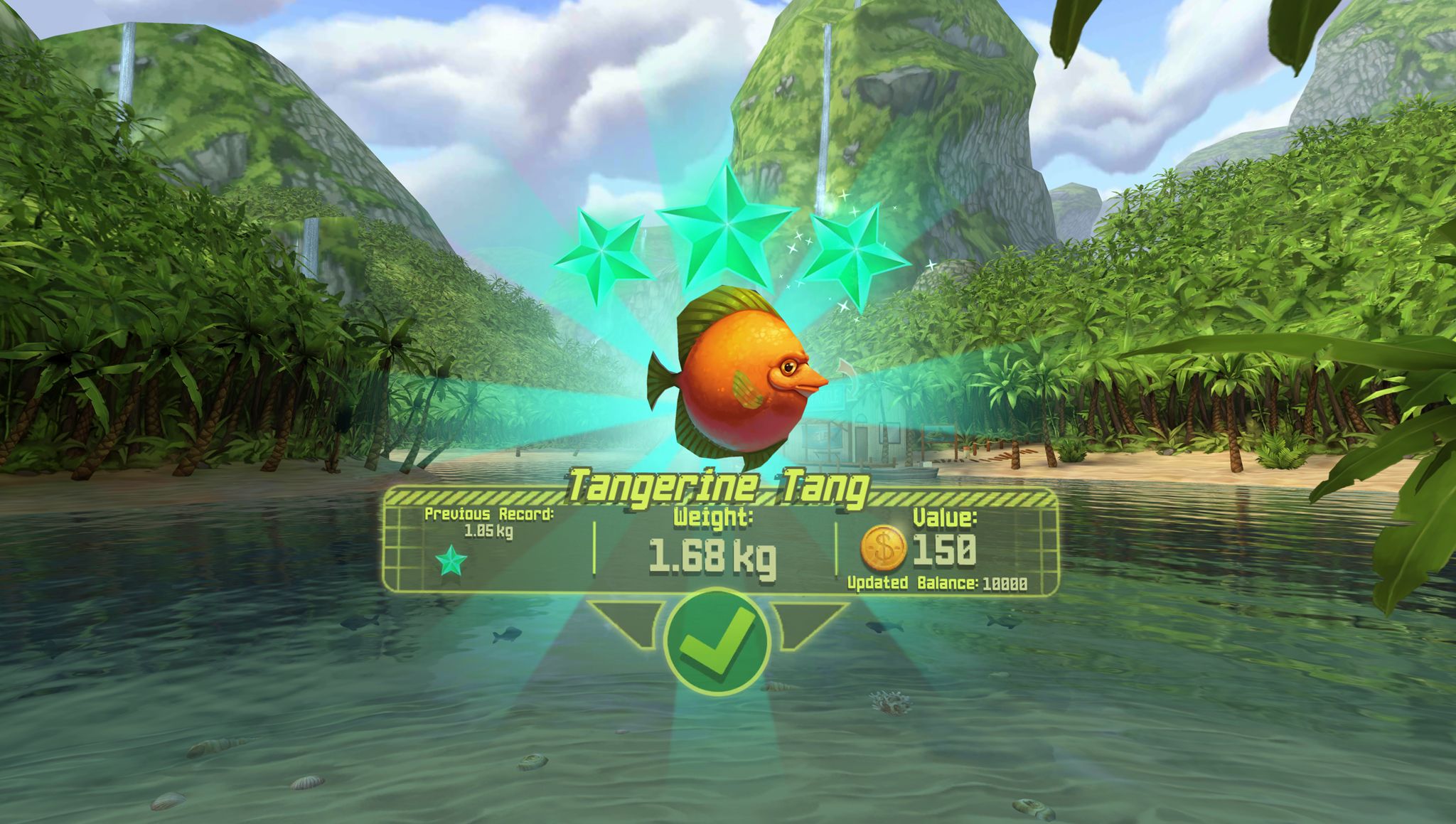 But that’s it. The main gameplay loop - catch fish to earn money - loses its appeal after the story is over. I didn’t feel the need to keep upgrading my fishing equipment. And filling in the missing spots in my database wasn’t a good enough reason to keep playing.

Bait! really needs more goals and more gameplay variety. However, as a free game with just one microtransaction (for a special type of bait that isn’t required to beat the game), it’s not bad.

Bait! is proof that fishing games are a great fit for Gear VR. I just wish it had more meat to it.
Next Up :
Hero Emblems II review - "Lovely visuals and music, but match-3 combat lacks strategic depth"

Hands on with VR fish-em-up Bait!