Flying in circles may cause nausea

Virtual reality is definitely the best place to be flying. Whether it’s feeling the vertigo from your elevation or being able to barrel roll through the air and induce a little bit of motion sickness, virtual reality is just a natural fit for flight sims. 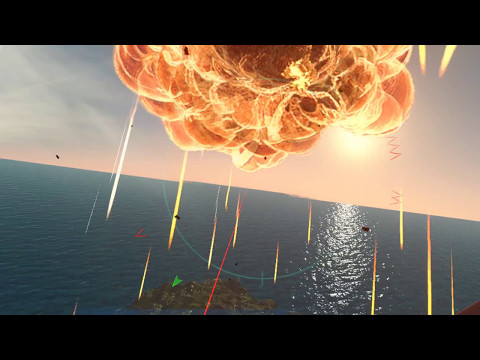 Subscribe to Pocket Gamer on
Using the HTC Vive motion controllers, Bad Day to Fly allows you to control a cockpit while shooting down alien invaders. Using one controller held horizontally as a flight stick, and another essentially as a laser pointer. You fly quite naturally with the flight stick’s tilt, and with a few straightforward shooting and flight controls mapped to the triggers and touch pad.

By the developer’s own admission, it can be difficult to control. A more advanced control mode is easily accessible, where players will be truly challenged just to control and navigate their aircraft. The more simple mode, which was definitely much easier to control, was fairly intuitive however.

Hovering above an almost PUBG-like island, aliens descend from their spacecraft and quite simply, players must remove them from the air by shooting them down. Somewhat inspired by the alien invasion from Independence Day, aliens fly around speedily and are difficult to catch with your guns.

Satisfaction strikes when you take down enemy crafts, of course. The explosion of alien tech and smoke effects invokes the kind of glee one gets from watching someone else topple a Jenga tower.

Still fairly early in development, despite a two year on-and-off dev cycle, Bad Day to Fly looks very promising. It’s a fun diversion, though isn’t exactly a flight sim, nor the best flight fighter in VR. Still, a fun game worth looking out for in the future.