If you’re thinking that Million Dungeon is just another one of those Match-3 games with the sparks flying all over the place, you’re in for a pleasant surprise. While the game does have all the bells and whistles that come with your typical entry in that category, it’s so much more than that. After all, can any other Match-3 game set you off on a quest to free a genie in a bottle or make you feel good about yourself by breaking up a bar fight?

Part RPG and part roguelike, Million Dungeon lets you choose a hero from different factions and then set off on an adventure either helping citizens you meet or fighting off monsters in different islands around the world. For every area you unlock, you’re given “days” where you can take your pick from random encounters you may or may not want to engage. For instance, you can visit an inn to rest up, shop for supplies in the local store, or enter forests with mysterious happenings and meet colourful characters along the way. Some encounters will reward you with goodies and buffs depending on your answers to certain choices, while some will pit you against monsters in a fight. 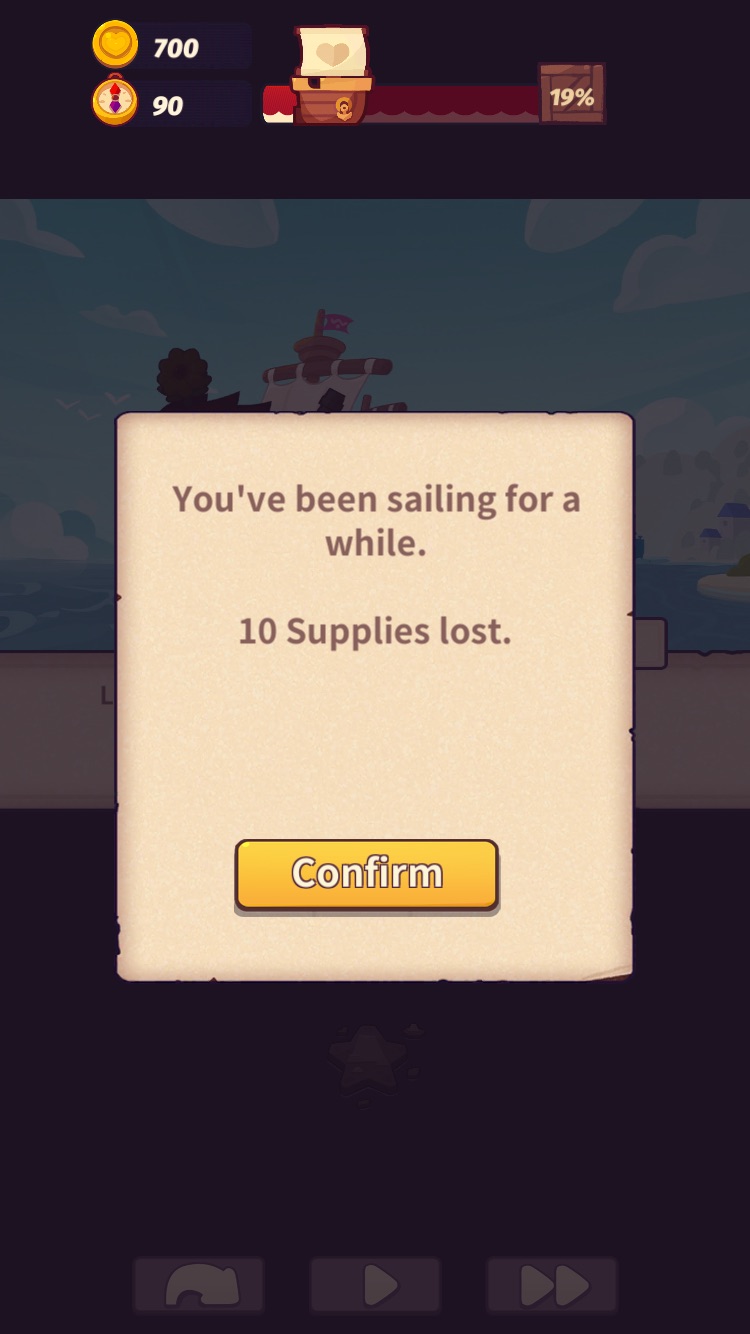 When a battle happens, the Match-3 element of the game comes into play. Each battle board has all of your units randomly generated in different positions, and you have to match the similar ones to remove them from the board. Removing these tiles or units either makes them attack the enemies on the other side or recovers your MP/HP. Special units, when removed, have very particular effects. For example, some will turn into more powerful units that you can sic against your enemies while some will give useful buffs to adjacent tiles around them—it’s an ingenious way of putting a twist to the typical ol’ Match-3, and it’s very, very addicting. 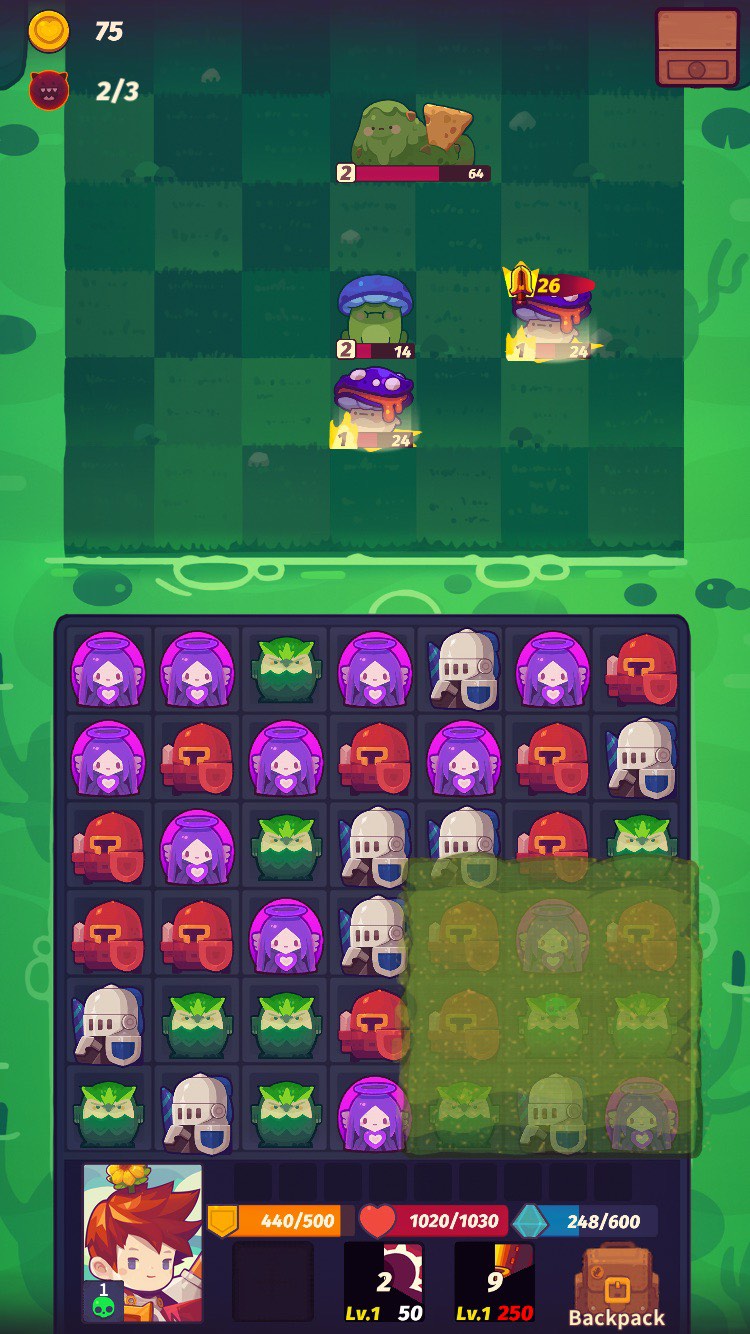 The battles are obviously the main point of the whole game, but to me, the artwork is what ultimately steals the show. Since the English translation isn’t really all that great (it’s very cringe-worthy most of the time), it can be challenging to understand what the heck is going on at times, resulting in hilarious conversations and descriptions that were probably lost in translation. But the saving grace is the adorable character design and the art that’s just too darn cute for words. Everything and everyone from forest fairies to undead zombies are too cuddly for their own good.

I mean, even though I know I’m supposed to be worrying about whatever’s happening at the moment (at one point, an old man I encountered told my hero a creepy story about a demon, an old puppet, and the price of immortality), the adorable art just makes it impossible for me to take anything seriously. 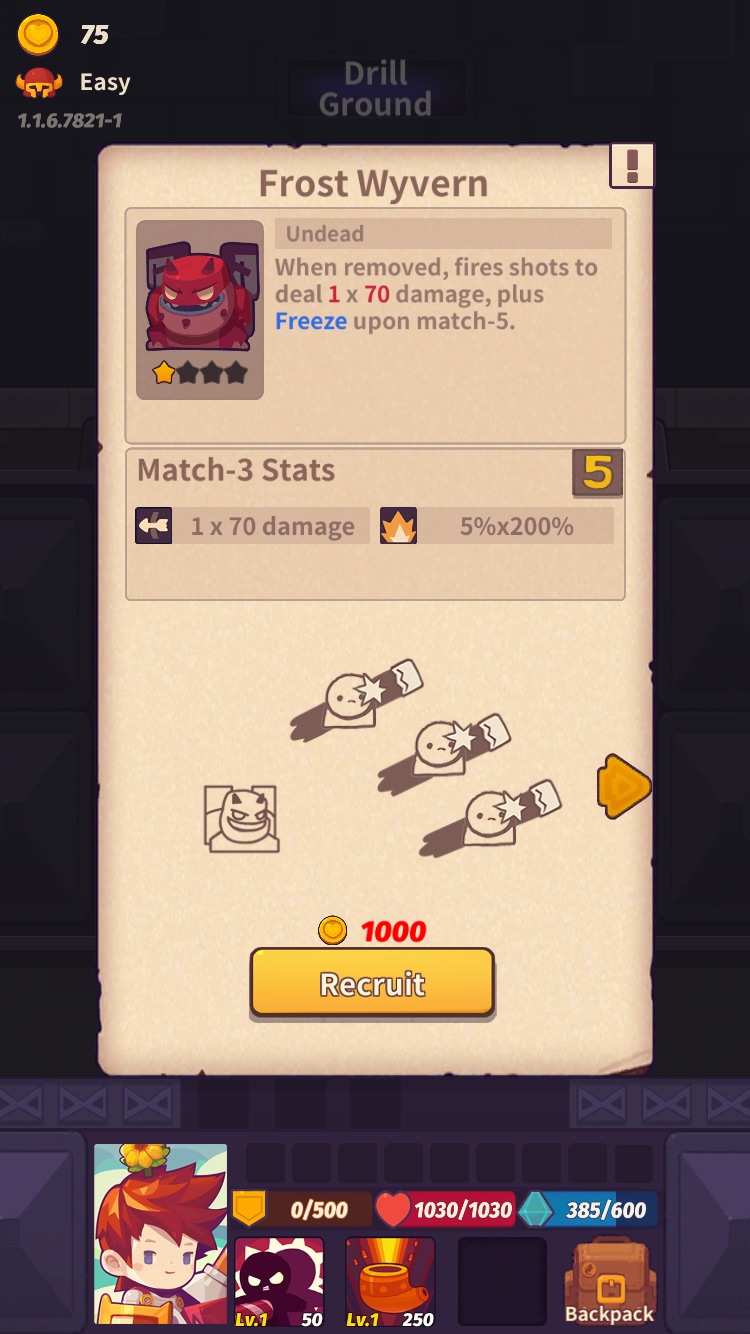 Now, while I do love the battle style and the creative stats for every unit and enemy (I also love how the battles aren’t timed), I’m not too sure Boke Technology Company Limited was able to pull off the roguelike aspect of the game all too well. When my hero died and I lost a match, I was given the option to respawn, and when I did, a pop-up in Mandarin kept asking me for my player ID. Since I didn’t have one, I got stuck at that point and couldn’t do anything else. I couldn’t start a new game or anything, so the only other option was to click the button that said, “Forfeit Game”. Thinking it would just take me back to the start of the dungeon like other roguelikes, I hit the button - and it erased all my progress completely. I had to start all over again as if I had just downloaded the game for the very first time.

I actually did have to uninstall and then install the game again, because even when I tried to start a new game, that pop-up still kept asking me for my ID. Apparently, other people have gotten stuck in the game due to this pop too with no way around it - the best you can do is hit “Sync Data” on the Options tab when you start a brand new game so that it won’t pop up again. It’s worked for me so far, so here’s hoping that dreaded screen of doom won’t pop up again any time soon.

Despite that, I’m really, really enjoying this game. Each battle requires you to strategize your moves based on your units and based on your hero too - for instance, the human knight hero focuses on targeted melee attacks for enemies right in front of you while the elf hero has units that randomly shoot at multiple enemies on the board at a range. Choosing units and heroes will depend entirely on your playstyle, as will how to spend your resources (do you upgrade existing units, or replace your four-unit party with new recruits you buy?).

Suffice it to say that I’ll likely be playing Million Dungeon for weeks and weeks to come, because how can I resist a mysterious merchant who offers me a bottle of “that”, “the other it”, and “the other other it”?

Million Dungeon is a surprising little treat that makes the typical Match-3 game relevant again - at least, for an RPG-lover like me. The cute and cuddly artwork is the ribbon that ties this hybrid game together neatly in a bite-sized, highly enjoyable, and totally non-demanding package - so the premium price is totally worth it.
By Catherine Ng Dellosa
| Dec 14, 2020 |
iOS + Steam
Find out more about Million Dungeon
SEE COMMENTS

The Elder Scrolls V: Skyrim comes to Xbox Game Pass for Android along with six other titles