We've had a massive selection of games featured in Pocket Gamer LaunchPad #2 so far, but some of my personal favourites have been the games which operate outside the realms of traditional mobile games. Alula, which placed in one of our Big Indie Pitches earlier in the year, fits the bill perfectly. It's not standard, and it's not what you expect.

In Alula you find yourself on a lonely island, knowing only that you're alone and will likely never see another person again. There's a little bit of hope though, as you can plant and maintain life on the island, buying seeds using stardust, and growing them into strong, varied plants to brighten up the lush green land.

But, there are some oddities around. The neon pink and purple sky, calming as it is, doesn't quite sit right... when you stargaze (a spawning-pairing puzzle to gain currency for unlocks) black holes appear in the skies tearing apart the stars you're spotting, and there's a tap just jutting out of the island... the only way to refill your watering can.

As well as that, you receive instructions and tips through messages in bottles - so there must be somebody else out there? As it turns out, there's a big gameplay loop planned by Miracle Tea (Ruya) which includes sharing with others over the internet, although never directly interacting. Its an interesting offering, especially considering how we've seen games like Sky: Children of the Light create strong communities despite players not being able to directly interact. 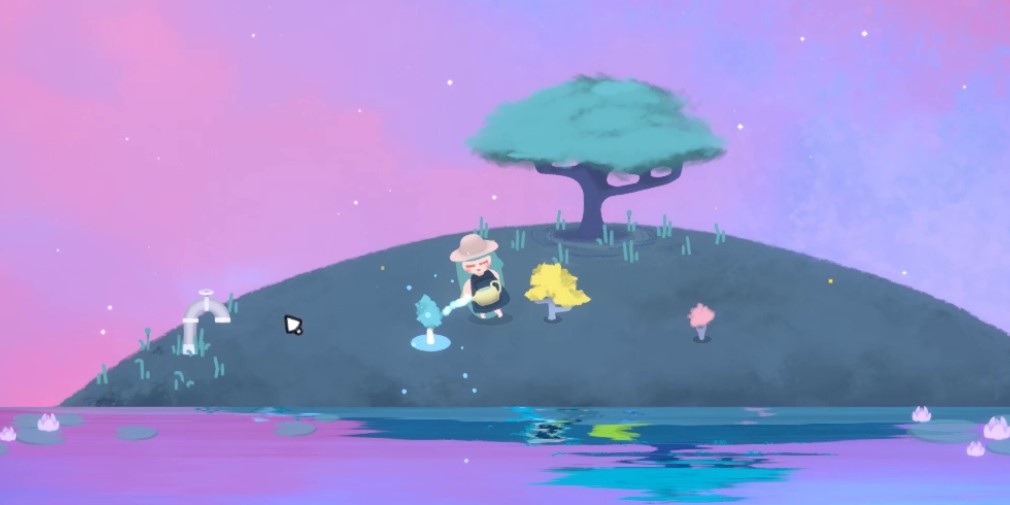 It's a beautiful game, and I'm really interested in seeing more of it as it develops. That said, it might be a while before we see it again, development is apparently plodding along just fine, but the release is planned for 2022  which - considering how long 2020 has been - certainly feels like its a long time away. In the meantime though, we will try to keep you updated on it, and if you're really interested then definitely check out Alula's Steam page which has some images which tease the multiplayer.