Boom Slingers is an upcoming action game from developer Boom Corp who describes the game as 'Angry Birds meets Worms', a combination that certainly piques my interest. The name may seem familiar if you're a follower of the Big Indie Pitch, where the game has won first place previously.

It's currently in an open beta stage, currently being available through Apple Testflight and Google Play Early Access. You'll be taking on other players in 1v1 battles, which play out in a turn-based fashion where you'll fling your Slingers' weapons towards your opponent in a bid to kill them or knock them to their death.

There will be a plethora of weapons to choose with 50 available, each of which can be upgraded to make it more potent by collecting battle cards. They range from cluster bombs to rockets to what appears to be a flaming steam train that rampages through the map, breaking the destructible terrain and knocking back anyone unfortunate enough to stand in the way.

There's a huge focus on customisation too with over 40 characters to collect and 20 plus emotes to add some personality to your persona. The character options are pretty varied as well with some of the options including a retro-styled games console, avocado, a happy looking cup and a moderately irked frog. 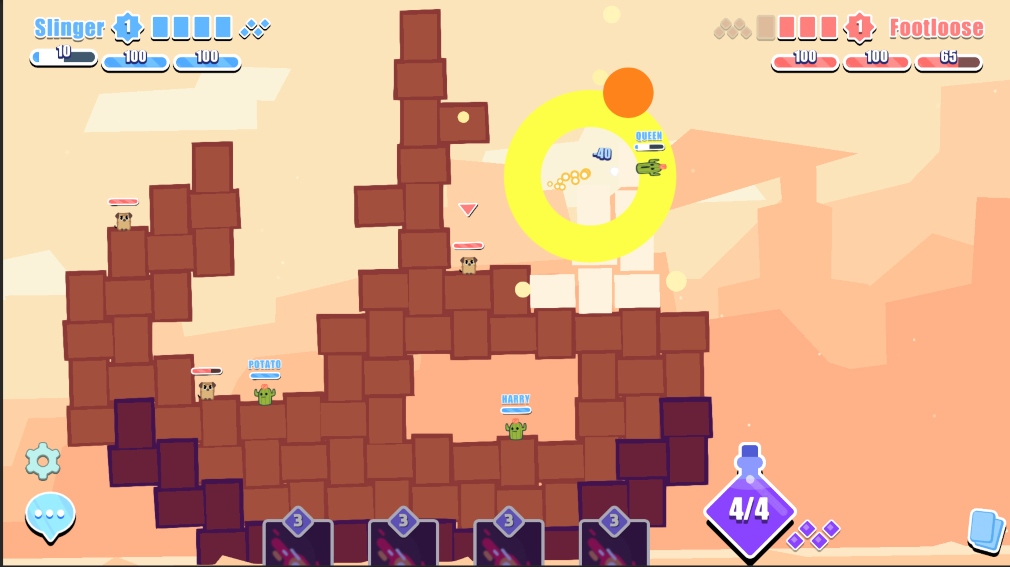 Boom Slingers also plays out in a seasonal format to give a sense of progression rather than simply hopping from one match to the next. There are also new arenas added daily to keep the game feeling fresh, all promising signs for what looks like an enjoyable multiplayer title.

Boom Slingers is available now for iOS through Apple Testflight whilst Android users can grab the game over on Google Play now where it's currently in Early Access. It's a free-to-play game with in-app purchases.